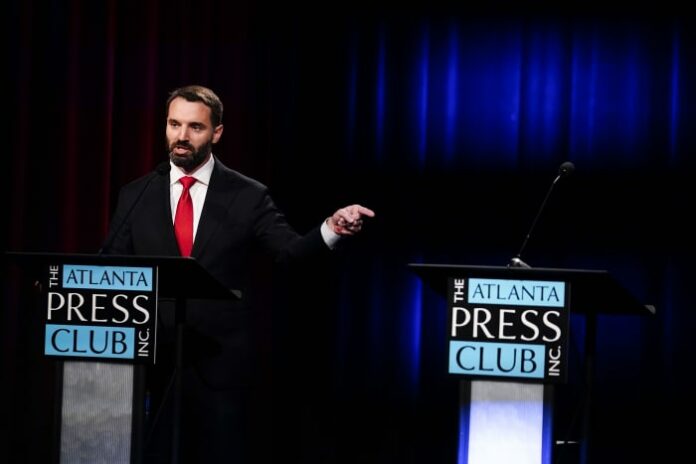 ATLANTA – Tuesday’s debate among Georgia Republican Senate candidates was predictably defined by the man who wasn’t there — Herschel Walker.

If the race wasn’t dominated by Walker’s football celebrity and Donald Trump endorsement, Gary Black, Latham Saddler, Kelvin King, Josh Clark and Jon McColumn might all be more viable candidates for the Republican nomination. But instead, each continued to try to scratch out a case for GOP voters to turn away from Walker and consider them in the May 24 primary as an alternative to take on Democratic incumbent Sen. Raphael Warnock in November.

“This is our fifth debate or forum he hasn’t showed up,” said Saddler, a Navy veteran and former bank executive. “We need a leader or fighter that’s going to show up to defeat Raphael Warnock in November. Raphael Warnock is a very smooth operator, we got to see him in action this last election cycle.”

The Atlanta Press Club, which sponsored the debate televised on Georgia Public Broadcasting, set out an empty podium for Walker, with the other candidates taking turns dunking on his absence.

They aim to drag Walker into a runoff, hoping the frontrunner will not be able to float above the fray in a one-on-one matchup. Black, Georgia’s elected agriculture commissioner, has made the sharpest attacks on Walker, saying Tuesday he’s unelectable in November because of questions about his past including “domestic violence, stalking women, threatened shootouts with police, business deals that have gone sour.”

Officers responding to a 2001 report that Walker was armed and scaring his estranged wife at a suburban Dallas home later noted that Walker “talked about having a shoot-out with police,” according to a police report revealed by the AP in February. In a protective order sought by his then-ex-wife in 2005, Walker was accused of repeatedly threatening her life. He’s also faced questions about whether he’s lied about graduating from the University of Georgia, about being the valedictorian at his high school and about whether he has inflated his business record.

Walker has been open about his long struggle with mental illness and acknowledged violent urges. His campaign has dismissed the report of a shoot out and blamed the media for highlighting it.

“Herschel Walker will not win in November, so selecting someone who can win, who has a record that can defeat Raphael Warnock should be the No. 1 priority,” Black said.

Walker has dismissed calls to debate, telling a radio station on April 20 that his opponents were jealous.

“Because right now Herschel’s going to win that seat,” Walker told WDUN-AM. “They can’t win it, so they’re going to the old politics where people are tired of that.”

Walker spokesperson Mallory Blount posted on social media Tuesday night that Walker was meeting with voters in Burke County, near Augusta. “Hope y’all have fun obsessing over Herschel Walker at the debate!” she wrote on Twitter.

At times, the candidates Tuesday had a standard Republican debate, all saying they would welcome a potential U.S. Supreme Court ruling overturning Roe v. Wade and declaring they want a total ban on abortion.

“I want to ask those people who are for abortion, I want to ask you this question, what did the baby do wrong to deserve to be killed?” said McColumn, a retired brigadier general.

Several candidates promised to cut federal spending as a way of combating inflation. Questioned about health care, Clark proclaimed his opposition to former President Barack Obama’s health care reform, with the former state representative saying he wanted to promote patient choice. Saddler defended himself against charges from Clark that he’s a former Democrat and a “global elitist,” promoting his experience working in the White House during the Trump administration.

King, a contractor and Air Force veteran, touted himself as the most well-rounded, while Clark noted he was the only candidate with legislative experience, saying he would “be the tie-breaking vote that could serve the citizens of Georgia from Day One.”

Multiple candidates expressed varying degrees of skepticism that the 2020 election in Georgia was fairly won by President Joe Biden over Trump. Some repeated Trump’s lies that the vote was stolen, despite the moderator pointing out that Trump’s own attorney general said there was no significant evidence of fraud.

But in the end, the focus came back to the empty podium, and the man who wasn’t there. Saddler suggested that Walker, if he couldn’t handle a Republican primary debate where candidates agreed on most things, wouldn’t be up to bigger challenges.