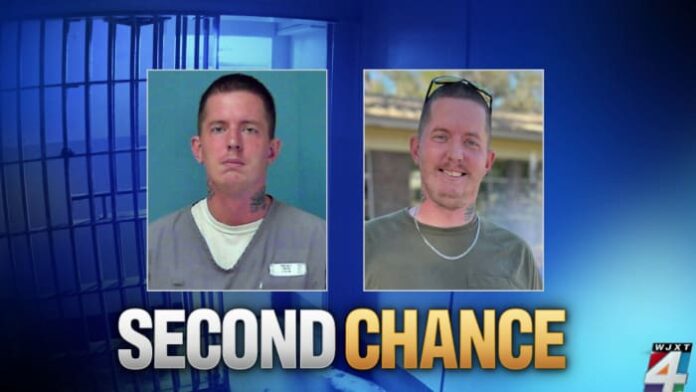 ORANGE PARK, Fla. – A Clay County man who robbed a Mandarin Publix in 2018 claiming he had a bomb has gotten a second chance with a new career.

Joshua Shelar, now 33, was a drug addict who said he hit rock bottom when he decided to walk into a grocery store on San Jose Boulevard, claiming he had a bomb.

Shelar pleaded guilty to the crime and served a 30-year prison sentence, followed by probation.

While in prison, he got involved in Christian ministry and claims that turned him around. While behind bars, he said he was also forced to stay off the drugs he abused, which included Fentanyl.

In November, Shelar reached out to News4JAX to share his story and to apologize to those he hurt. He said he wanted to be a productive member of society and was picking up odd jobs in construction, with the hope of being an electrician.

The interview, which aired as a Positively JAX segment on Thanksgiving, caught the attention of several viewers, including a manager at Jacksonville-based Miller Electric Company.

The manager asked to be connected to Shelar to offer him an interview. With Shelar’s permission, News4JAX shared his contact information. The rest is history.

Miller offered Shelar a job as a construction wireman. Shelar said he’s thankful to get his foot in the door and hopes to be in an apprenticeship program next month, where he can train to be a certified electrician called a journeyman.

The 5-year program is through the Electrical Training Alliance of Jacksonville. Companies, like Miller, employ students through the process and sponsor their tuition, so they graduate debt-free.

“It is very promising for him,” said Daniel McEachern, an administrator at the school. “If he keeps his nose to the grindstone, he works hard, in five years it’ll pay off. He will reap the benefits of all of his hard work.”

The pay for a graduate starts at $31 an hour and there’s the potential for much more.

“I’m looking forward to every part of it,” Shelar said. “Be patient, be humble and trust in God Almighty.”

Shelar admits as a convicted felon, he’s not someone many companies want to hire.

Shelar said his steady paycheck and bright future are bringing his family stability and relief.

He said it helps him provide for his wife and three children.

He said he knows many people may doubt his intentions, but that he will work hard to show he won’t take his second chance for granted — and that’s Positively JAX.

To learn more about the apprenticeship program, which is currently accepting applications, visit http://www.etajax.org/.