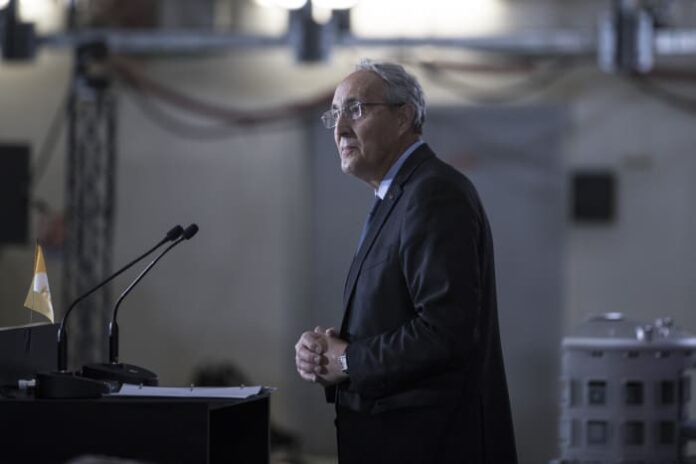 Director-General of the ITER Organization, Bernard Bigot speaks to representatives and journalists in the assembly hall of the ITER ( the International Thermonuclear Experimental Reactor), where components for the ITER Tokamak will be pre-assembled before integration into the machine in Saint-Paul-Lez-Durance, southern France, Tuesday, July 28, 2020. Bernard Bigot, a French scientist leading a vast international effort to demonstrate that nuclear fusion can be a viable source of energy, has died. He was 72. (AP Photo/Daniel Cole, File)

PARIS – Bernard Bigot, a French scientist leading a vast international effort to demonstrate that nuclear fusion can be a viable source of energy, has died. He was 72.

The organization behind the International Thermonuclear Experimental Reactor, or ITER, said Bigot died Saturday from an unspecified illness. The organization’s director general since March 2015, Bigot was approaching the midway point of his second term, due to end in 2025.

An ITER statement described his death as “a tragic blow to the global fusion community.”

His deputy, Eisuke Tada, will take over leadership of the ITER project during the search for Bigot’s successor.

Unlike existing fission reactors that produce radioactive waste and sometimes catastrophic meltdowns, proponents of fusion say it offers a clean and virtually limitless supply of energy if scientists and engineers can harness it.

ITER project members — China, the European Union, India, Japan, South Korea, Russia and the United States — are building a doughnut-shaped device called a tokamak in Saint-Paul-les-Durance in southern France. It is billed as the world’s largest science project. The aim is to trap hydrogen that’s been heated to 150 million degrees Celsius (270 million Fahrenheit) for long enough to allow atoms to fuse together.

The process results in the release of large amounts of heat. While ITER won’t generate electricity, scientists hope it will demonstrate that such a fusion reactor can produce more energy than it consumes.

ITER is now more than 75% complete and scientists aim to fire up the reactor by early 2026.