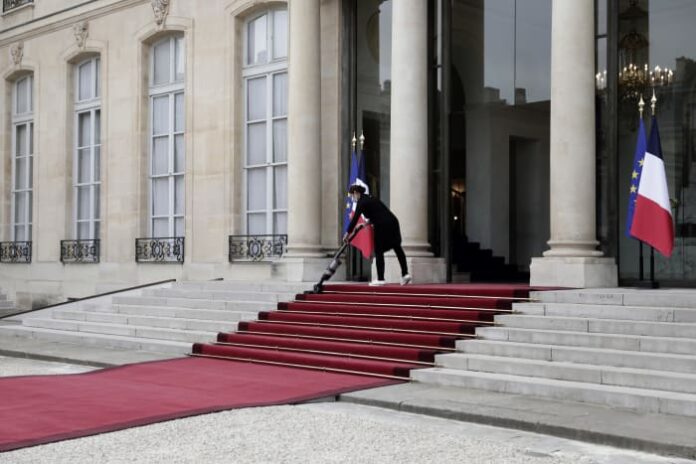 An emplyoee cleans the red carpet of the Elysee Palace prior to the inauguration ceremony of French President Emmanuel Macron, in Paris, France, Saturday, May 7, 2022. Macron was reelected for five years on April 24 in an election runoff that saw him won over far-right rival Marine Le Pen. (AP Photo/Lewis Joly)

PARIS – French President Emmanuel Macron is being inaugurated for a second term during a ceremony on Saturday at the Elysee presidential palace.

Macron was reelected for five years on April 24 in a runoff that saw him beat out far-right rival Marine Le Pen.

About 500 guests are expected at the ceremony, where the president of the Constitutional Council is to read out the results of the election.

Macron will be given the necklace of Grand Master of the Legion of Honor, France’s highest distinction, before making a speech.

He will then go to the gardens of the Elysee palace and listen to 21 cannon shots being fired from the Invalides plaza to mark the event, in line with tradition.

Macron will also review the military. Troops present at the ceremony include part of the crew of the Monge, the French navy’s second-biggest ship that is key to France’s nuclear deterrent. It was notably used for the tests of France’s nuclear-capable submarine-launched M51 missiles.

The symbol can be seen as a show of force at times when France is deeply involved in efforts to stop Russia’s war against Ukraine, including via sending truck-mounted cannons and other heavy weapons.

Macron’s second term will formally start on May 14.