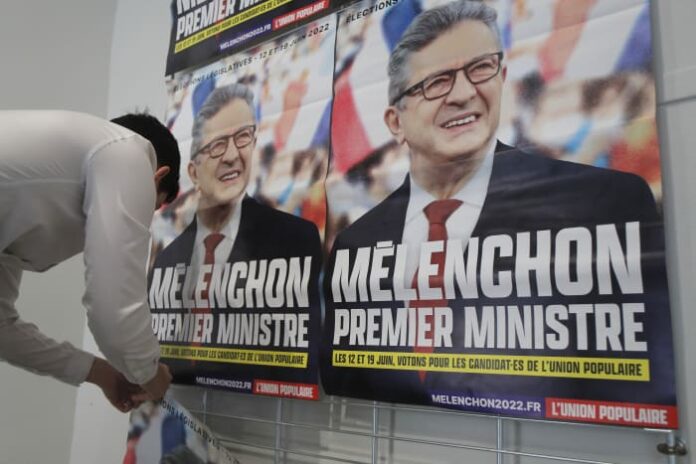 A supporter of far-left leader Jean-Luc Melenchon sticks electoral posters reading “Melenchon Prime Minister” before a local meeting, Thursday, May 5, 2022 in Lille, northern France. Jean-Luc Melenchon, who earned a third place finish in the presidential election, is trying to engineer a stunning comeback as the head of a coalition of leftist parties who have spent the past five years in the president’s large shadow. Legislative elections will be held over two rounds of voting, on June 12 and 19.(AP Photo/Michel Spingler)

PARIS – Long-divided left-wing parties in France will march into forthcoming legislative elections largely together, after the Socialist Party agreed late Thursday to join a new coalition of the left that hopes to limit re-elected centrist President Emmanuel Macron ‘s room for policy-making in his second term.

The Socialists join the Greens and the Communist Party in hooking their wagon to the France Unbowed party of hard-left leader Jean-Luc Mélenchon. He placed third in the presidential election in April, just short of the run-off won by Macron. But Mélenchon hopes his showing will be a springboard for the left to win big in the National Assembly elections in June.

By agreeing not to field candidates against each other in the 577 legislative districts, the left-wing coalition of parties has put long-held political and personal differences aside. By coalescing around Mélenchon, their aim is to deprive Macron of the parliamentary majority he used in his first term to push through legislation.

“We are going to campaign together,” Socialist leader Olivier Faure said in announcing that the party’s national committee had voted on Thursday night to join the coalition.

Still, the parties’ decision to rally around Mélenchon — who hopes to become prime minister of a new parliamentary majority for the left — is not without risk, because he remains a divisive figure among left-wing voters. The Socialist Party, in particular, has been riven with disputes about whether to get behind him.