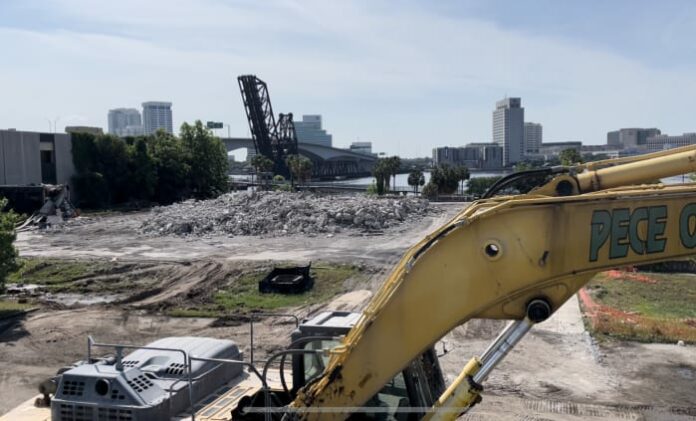 As of Tuesday, the former five-story home of the Florida Times-Union newspaper that has stood for 55 years has been all but erased from the north bank. With the main building leveled, the three-story production building next to the Acosta Bridge still needs to be torn down.

Current and former Times-Union employees have said they’re sad about the building coming down, and share their stories in a Facebook group for alumni, but there’s at least one current journalist who is excited for what the future holds.

Times-Union columnist Mark Woods has worked for the newspaper since 2001 and stopped by on Sunday to see what was left of the building.

“There’s a lot of people that are very emotional about it. I think, maybe I’ve moved past that grieving stage or something because it doesn’t hit me that way,” Woods told News4JAX.

Woods said there have been sad moments along the way, like the day the printing presses stopped and when the newspaper was forced to lay off employees.

“And now I’m kind of excited about the idea of opening up McCoys Creek and the Emerald Trail and some of the things that could happen,” Woods said.

Replacing the Times-Union building will be the $250 million One Riverside project, which includes more than 300 multifamily homes, a riverfront restaurant and retail stores. It’s part of a larger push to develop the riverfront in recent years.

“I feel optimistic that maybe we’re starting to get that momentum, and at that, you know, 10 years from now, the riverfront will be, in downtown, will be much more vibrant and much more conducive to get people to come down there than it is right now,” Woods said.

And although the long-time home of the Times-Union is now gone, Woods said the current employees are still here working hard.

“The papers still around, people sometimes said, well, is the papers gone? No, we’re still kicking and we’re in the Wells Fargo tower,” Woods said.

As far as the new project, demolition and clearing should be completed in July, and construction of the first phase of One Riverside could start this summer.