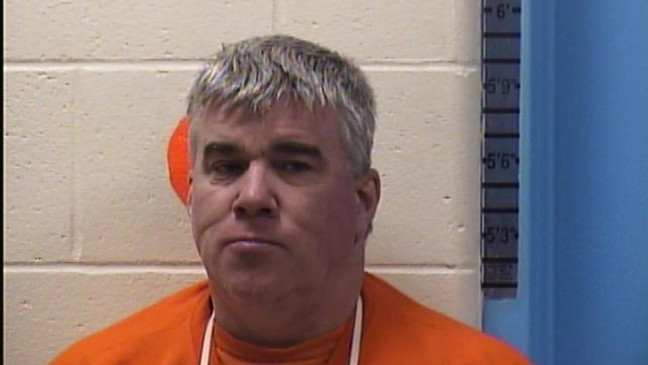 CALAIS (BDN) – A former police officer who was arrested for dealing drugs less than a week after he retired from the Calais Police Department will be sentenced next month on more than a dozen criminal charges.

Bishop was arrested in February 2021 after he was seen giving drugs to a 17-year-old girl in the parking lot of Narraguagus High School in Harrington. The drugs, which were inside an unmarked prescription pill bottle and were intended for the girl’s mother, included 27 acetaminophen and hydrocodone pills and three baggies of fentanyl, a synthetic opioid 100 times more potent than heroin, police have said.

When police executed a search warrant at his home a few days later, they found and seized 15 guns that had been reported stolen in Hancock and Washington counties over the previous four years. Two of the recovered guns, both of them police-issued Glock pistols, had been stolen in a 2016 burglary at the Gouldsboro Town Office, where Bishop was previously employed as a police officer.

In all, 35 different charges were filed against Bishop. Of those, 21 charges are being dismissed as part of a plea deal with the state attorney general’s office, including several theft charges related to the guns. Among the charges Bishop pleaded guilty to is a charge of stealing oxycodone that was in possession of the Calais Police Department.

Twelve of the charges Bishop pled guilty to are class B felonies, each of which carries a maximum punishment of 10 years in prison and a fine of up to $10,000. The other two are class C felonies, which each carry a punishment of up to five years behind bars and a $5,000 fine.

Bishop was never charged with burglary in connection with the gun thefts because there wasn’t sufficient evidence to connect him with the break-ins where the firearms had been stolen, Assistant Attorney General John Risler has said.

Prior to the Feb. 1, 2021 incident at Narraguagus High School, Bishop on multiple occasions allegedly gave drugs to the girl’s mother in exchange for what police euphemistically describe in court documents as “a non-monetary form of payment” in his cruiser while he still worked for Calais Police Department.

Defense attorney, Chris Largay of Bangor, couldn’t be reached for comment on his client’s plea deal.

Bishop, a Cherryfield resident, worked in law enforcement in Maine for 25 years before retiring on Jan. 30, 2021 from Calais Police Department.

Prior to that, he served as a police officer in Ellsworth, Gouldsboro, Winter Harbor, Milbridge, Jonesport, Baileyville, and the Washington County Sheriff’s Department. He was fired from the Winter Harbor Police Department in October 2015, though the reason for the firing has not been disclosed. He also worked for more than a year as a corrections officer at the Downeast Correctional Facility state prison in Machiasport.

In 2006, while employed as a deputy with the Washington County Sheriff”s Department, he lost a bid to be the Republican Party nominee for sheriff after the incumbant, Joseph Tibbetts, decided to retire.

Days after the primary loss, Bishop was seen throwing a political opponent’s campaign sign into the Narraguagus River in Cherryfield. He later was convicted of attempted criminal mischief and fined $100. But after months of legal wrangling between his union and the county, he was given a separation agreement and $10,000 in back pay.