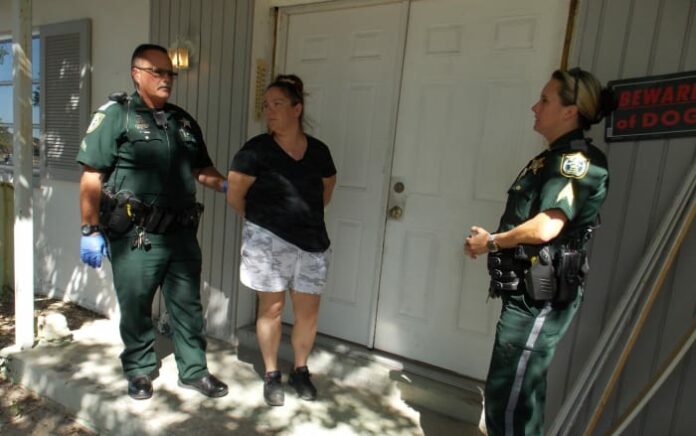 SPRING HILL, Fla. – A Florida woman shot her dogs 173 times with a BB gun over a two-month period when they attempted to dig under the fence of her home to get out of the yard, according to sheriff’s officials.

The Hernando County Sheriff’s Office said Jamie Lynn Kujawa, 37, was arrested Tuesday after X-rays revealed two of her three dogs had 173 projectiles embedded in them.

The sheriff’s office said a neighbor reported on April 19 he heard a BB gun being used “followed by yelps of dogs being hit.” He told an animal enforcement officer he heard the gun fire 15 times in 30-45 minutes, according to officials.

The officer visited the woman’s home and Kujawa told them she did not own a BB gun. When asked about proof of vaccination for her three dogs, she was unable to provide documentation and was ordered to get the dogs vaccinated in the next 10 days, the sheriff’s office said.

The day after, the neighbor reported he was able to see the dogs limping, officials said. The animal enforcement officer returned to Kujawa’s home and saw two of the dogs had wounds to the front paws and legs.

Deputies said on April 28, Kujawa asked about the owner surrender policy when she said she was not able to afford getting her dogs vaccinated and surrendered two of the three dogs. The sheriff’s office said the two dogs were taken to a veterinarian to get X-rays and 173 projectiles were found between them.

The sheriff’s office said deputies arrested Kujawa, who said she had been shooting the dogs for two months. Deputies learned she used a gas-powered BB gun to shoot them when they tried to get out of the yard.