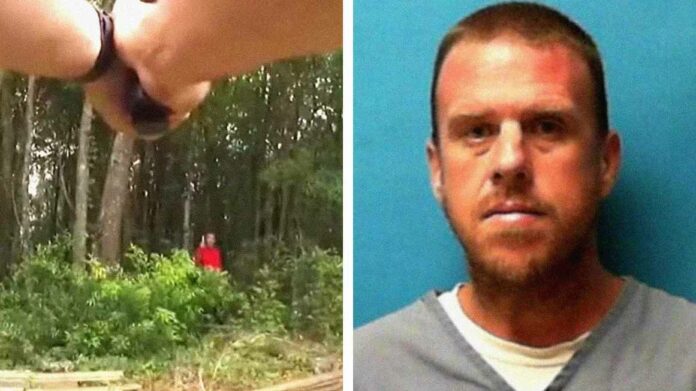 Newly released body-camera footage appears to show an unidentified Jacksonville, Florida, Sheriff’s Office law-enforcement officer shooting and killing a man holding an axe after refusing an order to put it down and attempting to talk to the officer.

The shooting happened in Jacksonville last April. According to First Coast News, police were called out by a report of a “mentally ill” man cutting power to people’s homes and vandalizing them. Body camera footage shows an officer encountering Kevin Mahan, 43, on a property, standing behind some bushes. He was holding an axe, but seemingly alone and not threatening anybody. The officer approaches and orders Mahan several times to drop the axe, but Mahan refuses, attempting to talk to the officer.

The officer has his gun drawn and trained on Mahan but keeps a safe distance. After the fourth demand that Mahan drop the axe, Mahan holds the axe up and starts saying, “Man, listen, bro … ,” and then the officer immediately shoots him. Mahan died. While he did hold up the axe, it didn’t appear he was doing so as a threat and was anyway much too far from the officer to swing it at him.

Mahan does have a lengthy history of encounters with the law, including convictions for armed robbery and was previously sentenced to prison after a conviction of being a felon in possession of a firearm. He was arrested a year ago after an alleged attempting carjacking incident and pleaded no contest to resisting arrest. He served 30 days in jail.

The officer was placed on administrative leave during the investigation, but First Coast News reports that he is now back on the job. The body camera footage was released on Friday. First Coast News turned to a retired former officer, Kim Varner, from the Jacksonville Sheriff’s Office, who explained the alternatives the officer could have taken. He could have waited for backup. He could have continued the conversation, since Mahan was clearly not actually approaching or threatening the officer.

It is, however, an example of how some police officers habitually approach these situations, prioritizing compliance over anything else—even if it actually escalates the possibility of violence and even when dealing with people whose mental faculties are suspect.

There’s a further insult as well. The reason the officer has not been identified is because he has sought and received anonymity under Florida’s Marsy’s Law. This law, a state constitutional amendment passed by voters in 2018, was sold as a “victim’s rights” bill that was intended to make sure crime victims were entitled to certain protections and rights during court cases, including protection from “the disclosure of information or records that could be used to locate or harass the victim or the victim’s family, or which could disclose confidential or privileged information of the victim.”

In reality, Florida’s Marsy’s Law is written so vaguely that police officers are using the law to prevent their names from being publicly released by declaring that they are “crime victims” when they have violent confrontations as part of their job. And in 2021, a Florida appeals court agreed, determining that the law can be invoked by police officers to conceal their names from the public, a blow against law enforcement transparency and accountability. Florida’s Supreme Court just heard arguments earlier this month to determine whether using Marsy’s Law to shield police officers’ identities violates the state constitution’s rules for public records.

Regardless, while people may reasonably debate whether the officer’s shooting of Mahan was justified under the law, no reasonable person would watch that body camera footage and conclude that the law enforcement officer was a “victim” of any crime.