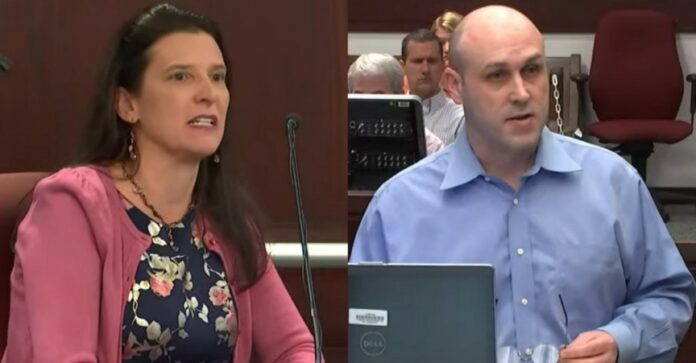 Trevor Summers, the Florida man convicted in August for kidnapping his former wife Alisa Mathewson, was sentenced on Monday to life in prison.

Mathewson testified that on the early morning of March 11, 2017, she was sleeping in bed with two of her younger children when she woke up to the feeling of water droplets on her face. It was Summers. He had broken into her home.

At the time, they were were living apart and divorcing after having five children together. Mathewson testified that she filed for an injunction against Summers back in October 2016.

According to testimony at trial, Summers manipulated their eldest daughter into helping him sneak into Mathewson’s home. He had the daughter take the four younger children to his home.

Meanwhile, he stayed at Mathewson’s home — tying her up and raping her, according to testimony.

The defendant, who went through several other lawyers during the pre-trial period, briefly balked at representing himself a trial and let lawyer Anthony Marchese deliver opening statements. But he fired his attorney as Mathewson’s direct examination was wrapping up.

When it came time for cross-examination, the former couple’s interaction was always tense and sometimes outright heated.

Regarding a sexual assault allegation against him, Summers asked if he threatened Mathewson to have “sex” with him.

“You broke into my home in the middle of the night when I was sleeping, attacked me, and tied me up!” she said. “I take that as yes, you threatened me to have sex with you! Yes!”

“You broke into my home in the middle of the night when I was sleeping, attacked me, and tied me up!” she said. “I take that as yes, you threatened me to have sex with you! Yes!”

She maintained he forced her to have “sex” with him. She acknowledged Summers did not push her or hold her down at the time of the alleged sexual assault, but she said: “Prior to having sex, you did push me, you did hold me down, you did tie me up, you did attack me, and you did break into my home when I was sleeping! You raped me!”

During closing arguments, the ever-soft-spoken Summers tried to dismiss his ex-wife’s answers as often “over the top.”

But jurors saw evidence of his text messages to his daughter, in which he discussed his plan to sneak in. Summers held Mathewson captive for days. Jurors heard testimony about Mathewson briefly escaping from his vehicle in a Walgreens parking lot. They heard testimony that he drove her around after leaving her home, and he cut her wrist as retaliation for the escape attempt, and they saw a picture of the wound he left.

Jurors saw testimony and saw evidence that before law enforcement swooped into save Mathewson, Summers sliced his own throat.

“This is what love is,” Summers said when cutting himself, according to Mathewson’s testimony. “I’m laying my life down for you. You don’t deserve this.”