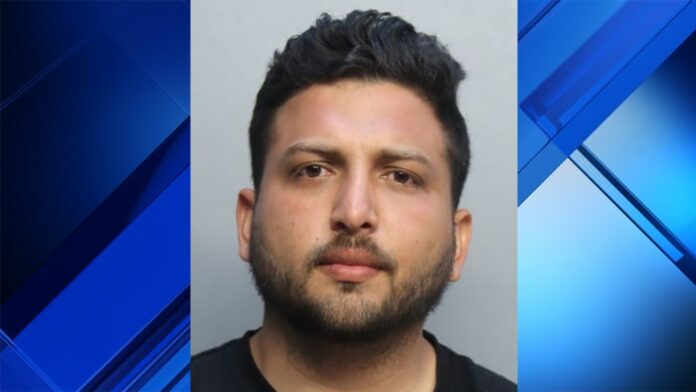 MIAMI – A man was arrested and nine citations were issued to several people after an engagement proposal party on a yacht that ended with deflated balloons polluting Biscayne Bay, News4JAX partner station WPLG in Miami reported.

David Sebastian Torres-Bocanegra, 28, was arrested in connection with the incident, and the citations issued total $22,500, Miami-Dade police said.

According to WPLG’s report, Tom Rivas, a fitness coach, said he chartered the yacht to propose to his girlfriend — who said “Yes!”

But hours later, the event, planned and executed by Cloud Nine, which specializes in romantic proposals, became associated with pollution in Biscayne Bay after a witness recorded video showing people on the yacht popping balloons that fell into the water.

“The crew proceeded to remove balloons … We honestly had no idea until we saw the videos,” Rivas wrote on Instagram. “A very special day for us has turned into tons of hate messages.”

WPLG reported that local environmentalists were outraged. The deflated latex, mylar, or vinyl balloons float on the surface of the water. Turtles, seabirds, and other marine animals often mistake the material for jellyfish and eat it — or feed it to their young.

In a statement on Instagram, a representative of Cloud Nine said the family-owned company had learned a lesson and is committed to no longer using balloons to decorate when events are near the water. The post said the company used a balloon vendor for the event and that it is never in charge of removing balloon decorations.

“Now we are trying to investigate the situation from our side,” the post read.

Authorities announced Wednesday that there was an ongoing investigation after WPLG News Anchor Louis Aguirre shared the witness video.

MPD and other agencies tasked with safeguarding our waterways are investigating an incident circulating on social media where littering was caught. We take crimes against the environment seriously & will work to bring the individuals responsible for their actions to justice. pic.twitter.com/nkcKqbZaye