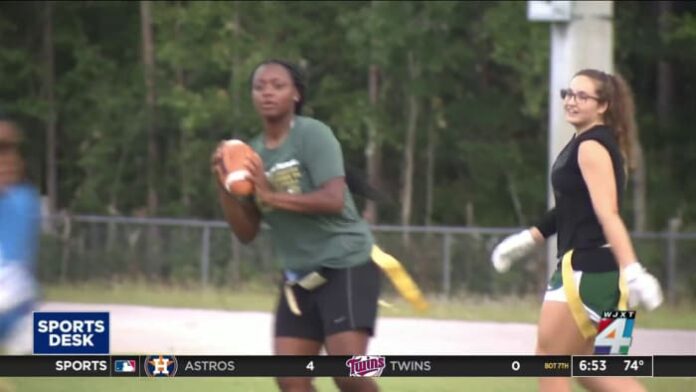 The Golden Eagles (16-1) are the final local team standing in the state playoffs and face off with Davie Western (17-0) in the Class 2A state semifinals on Friday night at Mandarin. It marks just the sixth time an area team has reached the final four round and first time for Fleming.

Win that one and the Golden Eagles would be just the second area team to reach the state championship game. Mandarin played for the title in 2013. And it just so happens that the Golden Eagles don’t have to travel far to play in that first final four game.

“It’s really exciting not to have to go too far,” said running back/linebacker Rose Martin. “It means a lot of fans can come out and see us play. So, I’m excited about it.”

The location is one positive for Fleming Island. The other is that the Golden Eagles had a chance to stay in town throughout the postseason, including a 19-7 win over Pace in the regional final.

For coach Clint Lyons and the seven seniors on the roster, it’s been the perfect way to end their careers. Two seasons ago, the pandemic wiped out most of the season.

Now, the only thing left to do is win a state title.

“I’ve had them a long time. A lot of them are seniors. I’m really happy that we’ve been on this run, especially since two years ago, they pretty much didn’t have a season. They only got to play three regular season games,” Lyons said.

“So, to keep winning and get some extra football and we hosted all the rounds of regionals. … The fact that they got a lot of extra football this year after not having a lot of flag football two years ago, that’s been very pleasing to me.”

It’s a significant task ahead for Fleming, but one that the Golden Eagles have waited a long time for.

“It’s really exciting,” said receiver/safety Sarah Yirka. “This is my fourth year on varsity and we haven’t completed it the past three years, so getting [in] this year, senior year, is exciting and I hope we take it all the way home.”

The Wildcats are the top-ranked team in the country, according to MaxPreps, and enter averaging 32.8 points and allowing just 2.7 per game.

The players know it’s a difficult task. So, too, is just getting to this point.

“It’s really exciting,” said quarterback Mykayla Maddox. “I’m really grateful that we made it this year. It’s been tough stuff, but we made it.”

No area team has won a state championship since the sport’s first title game in 2003. This is just the sixth time that an area team has reached the state semifinal round. Only Mandarin in 2013 has managed to play for a championship, losing to Seminole Ridge when the state was under a single classification format.

Fleming made it beyond the regional round just once before, losing in the state quarterfinals in 2015.

How have the Golden Eagles done so well this season? It’s been a simple formula.

“Don’t get got and bend don’t break, the wise words of Coach Lyons,” said center/linebacker Mackenzie Kirk. “It’s a great way to live your life.”

Success tough to come by