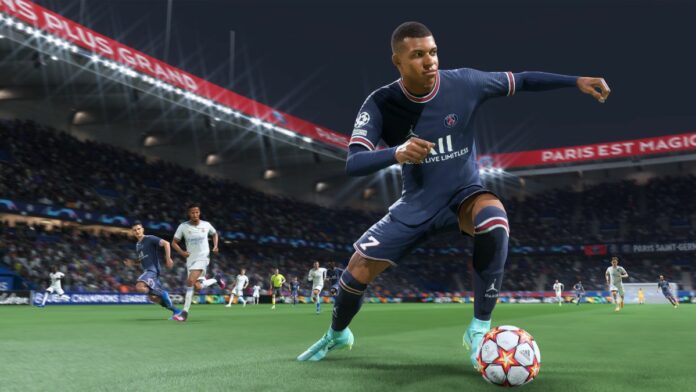 FIFA 2022 is getting crossplay support, letting you connect with friends in multiplayer matches even if they’re playing on a different platform from the one you’re using.

It will roll out in a testing phase soon, and allow FIFA 2022 players on PS5, Xbox Series X|S, and Google Stadia to play together in Online Friendlies and Online Seasons. During the test, it won’t be available for PS4, Xbox One, or PC players.

That’s particularly useful if you want to play with a buddy who stands on the opposite side of the PlayStation-Xbox aisle. PS5 players will soon be able to kick a ball about on the digital pitch with their Xbox friends – and vice-versa – with players’ console preferences no longer preventing them from connecting to their buddies online.

You’ll be able to play one-off friendly matches with players on other platforms, as well as work your way up the Online Seasons Divisions against others who are potentially playing on another console to yourself.

EA says it’s limited this initial crossplay test to Friendlies and Seasons so it can iron out any technical issues that appear. But it expects to roll out the feature to more game modes in the future off the back of community feedback gathered from this test.

Up to now, FIFA games haven’t supported crossplay functionality at all. So fans have been left disappointed that they aren’t able to play the mega sports series with their friends if they happen to own different gaming hardware.

Previous rumors suggested the feature would be coming to FIFA 2023. It looks like it’s landing a little sooner, however, with EA testing the feature with the current FIFA title.

EA hasn’t said when, exactly, we can expect the crossplay test to launch other than “the near future”. We expect the feature will go live for PC players once it’s ready to launch in full, even though they’ve been excluded from this test.

How to play FIFA 2022 crossplay

Crossplay won’t automatically activate when it rolls out the test later this year. To take advantage of the feature, you’ll need to manually opt into the test if you want to participate. Fortunately, it sounds pretty easy to do.

Once the test is live, a crossplay widget will appear in the bottom right-hand corner of the game’s main menu. That widget acts as the FIFA 202 crossplay hub, letting you enable or disable the feature, search for friends across platforms, or block players if you don’t fancy playing with them.

To play with friends across platforms, you’ll first need to add them to your FIFA 2022 friends list. Using the same widget, you’ll be able to search for players using their Xbox gamertag, PSN ID, or EA username, and add them as a friend. It’s then just a case of selecting them from your friends list and inviting them to a match.

It’s even easier to play in crossplay Online Seasons. Just enable crossplay, then head into the Online Seasons mode as you normally wood. All the usual matchmaking processes will be sorted behind the scenes, gathering players from across consoles into the tournament. You can just sit back and relax, knowing you might be about to face an opponent playing on a different console.