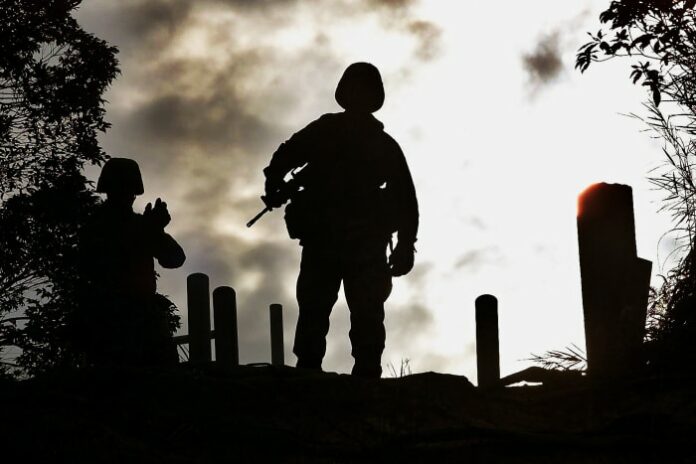 TOKYO – Okinawa on Sunday marks the 50th anniversary of its return to Japan on May 15, 1972, which ended 27 years of U.S. rule after one of the bloodiest battles of World War II was fought on the southern Japanese island.

The day is being marked with more bitterness than joy in Okinawa, which is still burdened with a heavy U.S. military presence and is now seeing Japanese troops increasingly deployed amid rising China tensions.

The Associated Press takes a look at the frustration that still lingers in Okinawa, 50 years after it returned to Japan.

WHAT HAPPENED AT THE END OF WWII?

U.S. troops, in their push for mainland Japan, landed on Okinawa’s main island on April 1, 1945.

The battle lasted until late June, killing about 200,000 people, nearly half of them Okinawan residents, including students and victims of mass suicides ordered by the Japanese military.

Okinawa was sacrificed by Japan’s imperial army to defend the mainland, historians say. The island group remained under U.S. occupation for 20 years longer than most of Japan, until 1972.

WHY WAS OKINAWA OCCUPIED?

The U.S. military recognized Okinawa’s strategic importance for Pacific security and planned to maintain its troop presence to deter Russia and communism in the region.

A 1946 decision by the Supreme Commander for the Allied Powers, Gen. Douglas MacArthur, separated Okinawa and several other southwestern remote islands from the rest of Japan, paving the way for U.S. rule beyond April 28, 1952, when the San Francisco treaty took effect, ending the seven-year U.S. occupation in the rest of Japan.

According to the Okinawa Prefectural Archives, imperial advisor Hidenari Terasaki told MacArthur of Emperor Hirohito’s “opinion” that the U.S. military occupation of Okinawa should continue to address worries about Russia.

Economic, educational and social development in Okinawa lagged behind as Japan enjoyed a postwar economic surge that was helped by lower defense spending because of the U.S. military presence in Okinawa.

HOW DO OKINAWANS REMEMBER U.S. RULE?

During U.S. rule, Okinawans used the dollar and followed American traffic laws, and any trips between Okinawa and mainland Japan required passports.

The base-dependent economy hampered the growth of local industry. The local Okinawan government had little decision-making power, and authorities had no access to the criminal investigation of U.S. military personnel.

Demands for reversion to Japan rose in the late 1950s across Okinawa over the confiscation of local land for U.S. bases.

Many Okinawans demanded tax reform, wage increases and better social welfare systems to correct disparities between Okinawa and the rest of Japan.

But the delayed reversion, the heavy U.S. military presence and mismanaged development funds from the central government have hampered the island’s economic development, experts say.

WHAT ARE OKINAWA’S MAIN PROBLEMS TODAY?

Many on Okinawa had hoped that the island’s return to Japan would improve the economy and human rights situation. A year before the reversion, then-Okinawa leader Chobyo Yara submitted a petition asking Japan’s central government to make the island free of military bases.

Today, however, a majority of the 50,000 U.S. troops based in Japan under a bilateral security pact and 70% of military facilities are on Okinawa, which accounts for only 0.6% of Japanese land. The burden has increased from less than 60% in 1972 because unwelcomed U.S. bases were moved from the mainland.

Okinawa’s average household income is the lowest and its unemployment is the highest of Japan’s 47 prefectures. If land taken by the U.S. military is returned to the prefecture for other use, it would produce three times more income for Okinawa than the island now makes from bases, Okinawa Gov. Denny Tamaki said.

Because of the U.S. bases, Okinawa faces noise, pollution, aircraft accidents and crime related to American troops, Tamaki said. A recent NHK television survey showed 82% of respondents in Okinawa expressed fear of being the victim of base-related crime or accidents.

The biggest sticking point between Okinawa and Tokyo is the central government’s insistence that a U.S. marine base in a crowded neighborhood, the Futenma air station, should be moved within Okinawa instead of moving it elsewhere as demanded by many Okinawans. Tokyo and Washington initially agreed in 1996 to close the station after the 1995 rape of a schoolgirl by three U.S. military personnel led to a massive anti-base movement.

Despite 72% opposition in Okinawa’s 2019 referendum, Tokyo has forced the construction of a new runway at Henoko Bay off Okinawa’s eastern coast. Opponents have cited environmental destruction, structural problems and soaring costs. But the prospects for completion remain uncertain.

Tamaki earlier in May adopted a new petition demanding from Prime Minister Fumio Kishida’s government a significant reduction of the U.S. military on Okinawa, the immediate closure of the Futenma base and the scrapping of the Henoko base construction.

Adding to Okinawa’s fears is the rapid deployment of Japanese missile defense and amphibious capabilities on Okinawa’s outer islands, including Ishigaki, Miyako and Yonaguni, which are close to geopolitical hotspots like Taiwan.

HOW DO OKINAWANS FEEL TODAY?

There are also ancient tensions between Okinawa and the Japanese mainland, which annexed the islands, formerly the independent kingdom of the Ryukus, in 1879.

There are complaints of discrimination and claims that Okinawans are forced to serve an “expendable role to protect mainland Japan,” said Hiromori Maedomari, an Okinawa International University politics professor.

Some people have started calling for independence from Japan.

After seeing their requests repeatedly ignored, many Okinawans, including younger generations for whom U.S. bases are part of their daily lives, feel there is no use speaking out, said Jinshiro Motoyama, 31, a key organizer of the 2019 referendum.

There are worries that calls by ruling lawmakers for a further military buildup amid rising tensions around nearby Taiwan could increase the risk of war.

”I’m afraid plans are being made on the premise that Okinawan people can be victimized in a conflict,” Motoyama said.