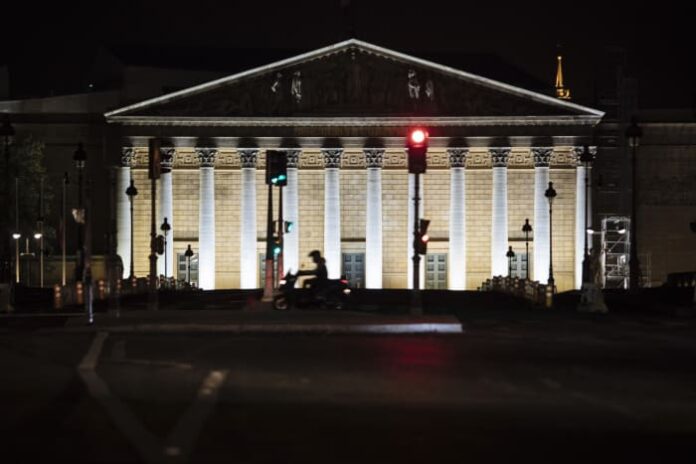 A government headed by hard-left veteran politician Jean-Luc Mélenchon is hardly a prospect Macron would relish at a time of crisis for the European Union. The French president would have to contend with a prime minister far apart ideologically from himself on crucial issues like France’s relationship with the 27-member nation bloc and the supplying of weapons to Ukraine.

Mélenchon, who earned a third place finish in the presidential election, is trying to engineer a stunning comeback as the head of what he hopes will be a coalition of leftist parties who have spent the past five years in the president’s large shadow.

Mélenchon inched closer toward uniting the shattered and weakened left by striking a deal on Monday with France’s Greens to not compete against each other in the legislative polls in June. Mélenchon’s La France Insoumise (France Unbowed) party is also talking to the Socialist and Communist parties in hopes that they’ll also get behind him.

Still, the fiery orator remains far away from becoming prime minister and potentially limiting Macron’s room for policy-making. Mélenchon’s nascent coalition of the left would need to win a majority of the 577 seats in the lower house, the National Assembly, in the elections that will be held over two rounds of voting, on June 12 and 19. With six weeks of campaigning left to go, a Macron-Mélenchon power split emerging in June looks unlikely for now.

Here is a look at some of the obstacles that stand in the way of Mélenchon’s ambitions:

The president’s political movement, La Republique en Marche (The Republic on the Move), and its centrist allies together hold over 300 seats in the outgoing parliament, making him the favorite to again win a majority.

Macron is hoping that having elected him to a second, five-year term, large enough numbers of voters in the 577 districts won’t want to tie his hands by saddling him with a parliament largely filled with opponents.

Some Socialist former ministers and other center-left figures have already announced that they support Macron.

He is also expected to get the backing in parliament of lawmakers from a newly created, center-right Horizons party run his former Prime Minister Edouard Philippe.

The nearly 8 million votes that Mélenchon got nationally in the presidential election are no guarantee that he can secure a legislative majority, in part because the voting system is different. Legislators are elected by district. And voters don’t always cast ballots in legislative elections along the same political lines that they chose in the presidential vote.

In the previous presidential election in 2017, Mélenchon also got more than 7 million votes, placing fourth. But his party went on to win less than 20 seats in the legislative election that followed.

His third-place finish this time, which earned him 22% of the vote in the first round, gave him leverage in trying to rally other parties on the left behind him for the legislative election.

Under the deal that his party struck on Monday with the Greens, the environmental party will field candidates in 100 districts where Mélenchon’s party won’t run, so they don’t compete against each other. The Greens agreed that if the coalition wins a parliamentary majority, then they’d back Mélenchon as prime minister.

The Communist and Socialist parties also appear close to a deal with Mélenchon’s party, although some Socialists have publicly denounced his views that France should “disobey” EU rules, including free-market regulations.

Mélenchon has also expressed opposition to supplying weapons to Ukraine and wants France to leave NATO’s military command, ideas which are not acceptable to center-left politicians.

The far-right goes into this legislative election looking stronger than ever.

Far-right leader Marine Le Pen was beaten by Macron in both the first round and the runoff in last month’s presidential vote. Still, her scores in both rounds were unprecedented for Le Pen.

Another far-right presidential candidate, Eric Zemmour, also got 7% of the first-round vote, placing fourth. The support they got suggests that political leanings in France may be shifting increasingly to the right.

Yet legislative elections are traditionally difficults for Le Pen’s National Rally, in part because other parties often come together to bar the way for its candidates. The National Rally won just eight seats five years ago.

This time, the party hopes to elect at least 15 lawmakers, which under parliamentary rules would give its group more speaking time and more seats on parliamentary commissions.

Le Pen will run for reelection as lawmaker in her working-class stronghold of Henin-Beaumont in northern France.

Zemmour has announced that his party, Reconquest, won’t field candidate in places where National Rally members are running.

Follow AP’s coverage of the French election at https://apnews.com/hub/french-election-2022