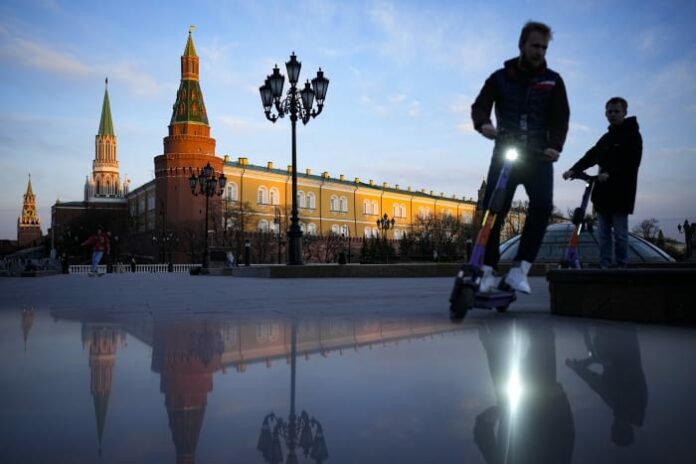 Russia appeared to dodge default on its foreign debt by dipping into its scarce dollar reserves. But Moscow’s debt drama is far from over.

The government had claimed that U.S. sanctions freezing its massive currency reserves held abroad meant it couldn’t pay and that Russia wasn’t to blame for any default, the first on foreign debt since the 1917 Bolshevik Revolution.

Even if Russia is found to have made the most recent payments, others are coming due. Plus, U.S. permission for American bondholders to accept payment on Russian bonds is set to expire May 25, so even if Russia tries to pay, investors would not legally be able to take the money.

Here are some of the issues surrounding Russian debt:

WHY ARE PEOPLE TALKING ABOUT A POSSIBLE RUSSIAN DEFAULT?

Ratings agencies have said that if bonds specify payment in dollars, then paying in rubles amounts to a failure to pay as promised. One reason Russia would want to pay in rubles instead of its reserves of foreign currency is that a large part of them have been frozen abroad. It made Friday’s payment by dipping into scarce internal reserves that sanctions could not touch.

Russia has not definitively avoided default unless the money made its way from Citigroup through the banking system to bondholders ahead of Wednesday’s deadline.

“Bondholders don’t get paid until Citigroup processes the payments” and pass them on to clearinghouses that distribute payment to bondholders, said Jay S. Auslander, a top sovereign debt lawyer at the firm of Wilk Auslander in New York.

Banks are being extremely cautious about any transactions with Russia and may want to check with U.S. and UK authorities first. But “I think it’s likely is that the funds will make it to the bondholders, in which case, they will not be in default this time,” Auslander said.

HOW MUCH DOES RUSSIA OWE?

HOW DO YOU KNOW IF A COUNTRY IS IN DEFAULT?

Ratings agencies can lower the rating to default or a court can decide the issue. Bondholders who have credit default swaps — contracts that act like insurance policies against default — can ask a committee of financial firm representatives to decide whether a failure to pay debt should trigger a payout, which still isn’t a formal declaration of default.

The Credit Default Determination Committee — an industry group of 14 banks and investors that determines whether or not to pay on these swaps — said Friday that they “continue to monitor the situation” after Russia’s payment. They were scheduled to meet Tuesday.

WHAT CAN INVESTORS DO?

The formal way to declare default is if 25% or more of bondholders say they didn’t get their money. Once that happens, provisions say all Russia’s other foreign bonds are also in default, and bondholders could then seek a court judgment to enforce payment.

In normal circumstances, investors and the defaulting government typically negotiate a settlement in which bondholders are given new bonds that are worth less but that at least give them some partial compensation.

But sanctions bar dealings with Russia’s finance ministry. And no one knows when the war will end or how much defaulted bonds could wind up being worth.

In this case, declaring default and suing “might not be the wisest choice,” Auslander said. “You can’t negotiate with Russia right now. You’re wading into a world where sanctions are constantly changing, where there are a lot of unknowns. So you may see creditors decide at this point to keep their intentions close to their vest and hang tight for now.”

Popular sentiment is a consideration for investors, especially any who may have bought bonds at knocked-down prices in hopes of profiting from a settlement.

“Right now is maybe not a good time to rush in and show that you were profiting off distressed debt in Russian bonds,” Auslander said. “Will that time come in the future? I suspect it will.”

Once a country defaults, it can be cut off from bond-market borrowing until the default is sorted out and investors regain confidence in the government’s ability and willingness to pay. But Russia has already been cut off from Western capital markets, so any return to borrowing is a long way off anyway.

The Kremlin can still borrow rubles at home, where it mostly relies on Russian banks to buy its bonds.

WHAT IMPACT COULD A RUSSIAN DEFAULT HAVE?

The country is already suffering substantial economic impact from Western sanctions, which have sent foreign companies fleeing and disrupted trade and financial ties with the rest of the world. Default would be one more symptom of that isolation and disruption.

Investment analysts are cautiously reckoning that a Russia default would not have the kind of impact on global financial markets and institutions that came from an earlier default in 1998. Back then, Russia’s default on domestic ruble bonds led the U.S. government to step in and get banks to bail out Long-Term Capital Management, a large U.S. hedge fund whose collapse, it was feared, could have shaken the wider financial and banking system.

While the war itself is having devastating consequences in terms of human suffering and higher food and energy prices worldwide, default on government bonds would be “definitely not systemically relevant,” Kristalina Georgieva, head of the International Monetary Fund, has said.