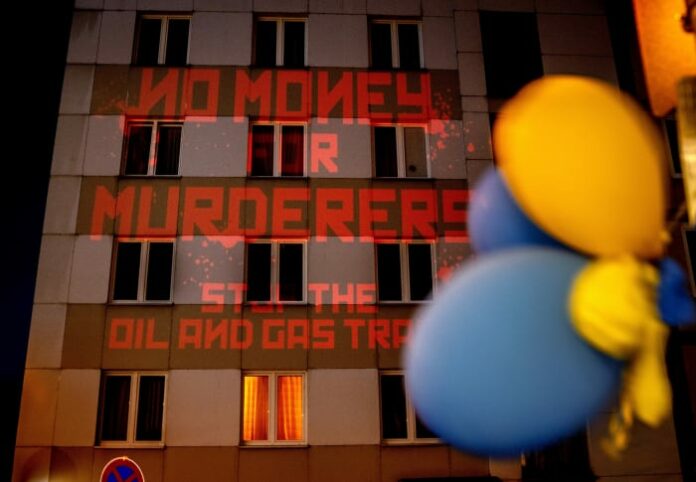 The European Union’s executive commission has proposed phasing out imports of Russian oil within six months. It is part of Europe’s struggle to stop paying Russia $850 million a day for energy and hit the Kremlin’s finances over its invasion of Ukraine.

But reversing decades of dependence on Russian oil and natural gas is not a simple matter for the 27-nation bloc. For one thing, Hungary and Slovakia, both landlocked and big users of Russian oil, have said they won’t go along with the boycott.

Here is what the oil sanctions could mean for people in Europe and the rest of the world:

HOW MUCH DOES EUROPE PAY RUSSIA FOR ENERGY?

Gas and oil have kept flowing even as governments denounce the war. The EU sends $450 million a day to Russia for oil and $400 million per day for natural gas, according to calculations by analysts at the Bruegel think tank in Brussels.

HOW MUCH RUSSIAN OIL GOES TO EUROPE?

Europe is the biggest purchaser of Russian crude, receiving 138 million tons in 2020 out of Russia’s total exports of 260 million tons — or 53%, according to the BP Statistical Review of World Energy. Europe, which imports almost all of its crude, gets a quarter of its needs from Russia.

Oil is refined into fuel for heating and driving as well as being a raw material for industry.

WHY IS THE FOCUS ON OIL INSTEAD OF NATURAL GAS?

It’s harder to find alternative sources of natural gas because it comes mainly by pipeline. It would be easier to find other sources for oil, which mostly moves by tanker and is traded globally. So a natural gas boycott is off the table for now. Heavy gas users like Germany say an immediate cutoff could cost jobs, with industrial associations warning of shutdowns in glass and metals businesses.

Cutting off both natural gas and oil would likely cause a recession in Europe, economists say.

WHAT COULD HAPPEN WHEN RUSSIAN OIL SUPPLIES STOP?

Europe imported 3.8 million barrels a day from Russia before the war. In theory, European customers could replace those barrels from suppliers in the Middle East, whose exports now mostly go to Asia, as well as from the United States, Latin America and Africa. Meanwhile, cheaper Russian oil could take the place of the Middle East shipments to Asia.

But it would take time to make that adjustment. New supplies would have to be found elsewhere. Several large refineries in central and Eastern Europe rely on oil from a Soviet-era pipeline and would have to find another way of getting oil to make gasoline and other products.

Bruegel analysts say that means European countries should be ready to impose measures to reduce fuel use, such as making public transport free and incentivizing car-sharing. If those measures don’t work, tougher ones such as odd-even driving bans based on license plate numbers would be needed. Similar measures were taken during the 1973 OPEC oil embargo, when Germany imposed car-free Sundays.

Russia is a major supplier of Europe’s diesel fuel for trucks and farm equipment, meaning its price affects those for a wide range of food and goods.

WHAT COULD HAPPEN TO THE GLOBAL OIL MARKET?

Chances are that oil prices would go up for everyone because oil is a global commodity. That would mean higher prices at the pump and for home heating, less disposable income for consumers and set back the economic recovery from the COVID-19 pandemic.

Russia would probably produce and export less oil after losing its biggest customer, Europe. That’s because all of Russia’s exports can’t simply be redirected from nearby Europe to far-off Asia due to shipping and logistical constraints. It would mean a major reshuffling of the world’s crude oil flows.

Buyers in India and China might avoid Russian oil if it means possible sanctions trouble with the West. And Western customers are already shunning Russian oil because they don’t want to be associated with the country or can’t find insurers or banks willing to handle dealings with Moscow.

On the other hand, some Asian customers might jump at the chance to snap up discounted Russian oil. Especially if the sales are off the books, as appears to be happening in some cases.

The OPEC oil cartel led by Saudi Arabia — which sets production levels along with allied non-members like Russia — has made it clear it won’t increase output to make up for any supply loss from Russia due to a boycott. They meet again Thursday.

Rystad Energy expects a loss of 1.5 million to 2 million barrels per day and oil reaching $120 to $130 per barrel by year’s end.

A milder scenario, in which most Russian oil shunned by Europe is snapped up in other energy-hungry countries not taking part in the sanctions, would see a loss of 1 million barrels per day. Oil prices would drop below $100 by June and keep falling to $60 by year’s end.

HOW MUCH WOULD A BOYCOTT COST RUSSIA?

It would cost the Kremlin, with energy the main pillar of its budget. The Russian government got an average of 43% of its revenue from oil and natural gas between 2011 and 2020.

And yet it’s not so simple.

The price for Russia’s main export benchmark to Europe, Urals crude, has been knocked down to a $35-per-barrel discount compared with international benchmark Brent.

But because of generally higher oil prices, Russia’s revenue losses have so far been limited. Those foreign currency earnings are helping prop up Russian finances amid sanctions.

“The EU gradual embargo on Russian oil is a risky bet, as in the short term, it might leave Russian revenues high while implying negative consequences for the EU and global economy in terms of higher prices,” said Simone Tagliapietra, an energy policy expert at Bruegel.

That’s aside from fears that an oil boycott might provoke Russia to cut off gas supplies in retaliation.