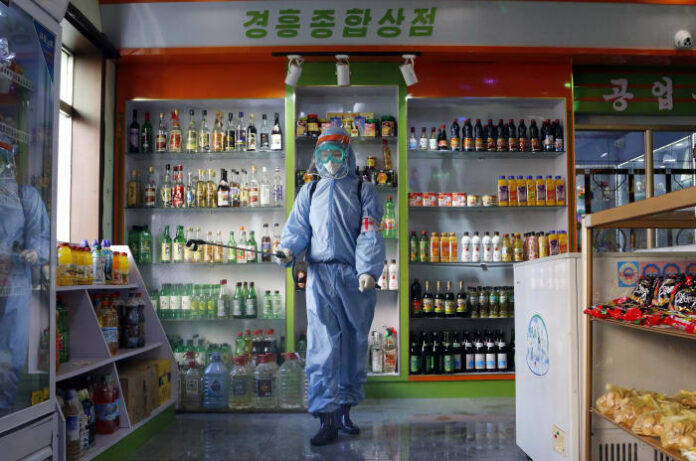 SEOUL – Before acknowledging its first domestic COVID-19 cases, North Korea spent 2 1/2 years rejecting outside offers of vaccines and steadfastly claiming that its superior socialist system was protecting its 26 million people from “a malicious virus” that had killed millions around the world.

Its surprise admission this week has left many outsiders wondering just how bad things really are, and there’s rising worry that it could cause a major humanitarian crisis in a country with one of the world’s worst public medical infrastructures.

Because the North has been shut up tight since early 2020, with no reporters, aid workers or diplomats regularly going in, reading the situation is something of a guessing game, and the North has been vague with its state media descriptions of widespread fevers. But there are some worrying facts: no reported vaccines, very limited testing capability, a terrible medical system and widespread poverty.

Without immediate outside aid shipments, some experts say North Korea could face massive fatality and infection rates. Others, however, say North Korea is using its admission of an outbreak to rally the public against the virus and boost its control of its people.

Here’s a look at what a lockdown in one of the world’s most locked-down nations might look like.

WHAT IS KNOWN ABOUT THE OUTBREAK?

North Korea announced Thursday that an unspecified number of people in Pyongyang tested positive for the omicron variant. It called the outbreak the state’s “most serious emergency.”

It was unclear, however, about the extent, and the North’s media used vague language.

State media reports Friday said a “fever” has been spreading “explosively” since late April, leaving six dead, 350,000 sickened and 187,800 quarantined. They said one of the dead had been diagnosed with the omicron variant.

The reports said the cause of the fever has yet to be identified.

Kim Sin-gon, a professor at Seoul’s Korea University College of Medicine, said most of the people with fever were likely virus patients. He said North Korea has a limited number of COVID-19 testing kits.

The World Health Organization says North Korea has reported tests of 64,200 people since the pandemic’s start, an extremely low figure compared with other countries. The number of COVID-19 tests in South Korea stands at about 172 million.

North Korea’s outbreak may be linked to a massive military parade on April 25, where leader Kim Jong Un spoke about his nuclear weapons in front of tens of thousands of Pyongyang residents and troops. The omicron virus may have entered North Korea over its northern border with China when it reopened railroad freight traffic between the two countries in January. The border has since been closed.

WHAT ARE THE CHALLENGES?

The outbreak could be devastating because North Korea’s people largely remain unvaccinated and it suffers a chronic shortage of medicine and medical equipment.

“North Korea has many vulnerable people who don’t have strong immune systems. Its official inoculation rate is zero and it has no COVID-19 treatment pills,” Kim, the professor, said. “North Korea may end up with the pandemic’s worst death and infection rates in the world for its population size” without outside support.

In many advanced countries, omicron has led to significantly fewer hospitalizations and deaths than previous coronavirus variants, but that’s mostly because of vaccinations, use of COVID-19 antiviral pills, effective treatment at intensive care units, and populations that have been exposed to the virus before. None of this applies to North Korea, said Jung Jae-hun, a professor of preventive medicine at South Korea’s Gachon University.

“We were talking about a 0.1% fatality rate for omicron in South Korea, but that’s going to be significantly higher in North Korea, possibly even reaching 1%, although it’s difficult to make accurate predictions at this point,” Jung said.

North Korea’s secretive nature makes it virtually impossible to figure out the true scale of its outbreak and how it will develop.

Many North Koreans have adjusted to living with a troubled medical system and buying medicine privately, according to Ahn Kyung-su, head of DPRKHEALTH.ORG, a website focusing on health issues in North Korea.

While North Korea cannot avoid mass infections, Ahn said it will likely avoid “a catastrophic” death toll like the hundreds of thousands of deaths reported during a mid-1990s famine.

HOW IS NORTH KOREA RESPONDING?

Since Thursday, North Korea has imposed a nationwide lockdown, isolating all work and residential units from one another. But there are signs that the country might try to live with the virus, to some extent.

Kim Jong Un still ordered officials to move ahead with construction, agricultural and other scheduled state projects. On Thursday afternoon, the country even test-fired three ballistic missiles, suggesting it would continue its recent streak of weapons tests.

Hong Min, an analyst at Seoul’s Korea Institute for National Unification, said North Korea’s pandemic response will be mostly about isolating people with symptoms at shelters. He said North Korea doesn’t have the resources to impose extreme lockdowns like in China, which has shut down entire cities and confined residents to their homes. It’s also worried about further hurting an already fragile economy.

Ahn said the toughened anti-virus steps won’t be much different from previous curbs and that it’s mostly rhetoric meant to press a public tired of long-running pandemic restrictions to keep their vigilance amid surging cases in neighboring China.

North Korea may use the elevated pandemic response to boost its control of its people, said Yang Un-chul, an analyst at the private Sejong Institute. North Korea would have received previous outside vaccine shipment offers if it had indeed wanted to guard against the virus, Yang said.

WHAT ARE THE PROSPECTS FOR OUTSIDE HELP?

The outbreak renews hopes that North Korea might accept outside shipments of vaccines, COVID-19 treatment pills and other medical supplies.

North Korea won’t directly ask for such help but will instead see how Seoul and Washington react at first, said Kim, the professor.

Other experts say that North Korea may think that isolating people with symptoms is the only realistic option it has, considering its deficiencies in hospital infrastructure and medical supplies, which would be difficult to overcome without extensive outside help — something North Korea is unlikely to accept.

Jung said the only meaningful help North Korea might allow is limited supplies of vaccines for the elderly and people with pre-existing medical conditions, as it’s too late to inoculate the country’s entire population.

Hong said North Korea’s moves to push on with its goals of improving its economy and military despite the outbreak suggest that the country is willing to accept a certain level of fatalities to gain immunity through infection, rather than receiving vaccines and other outside help.