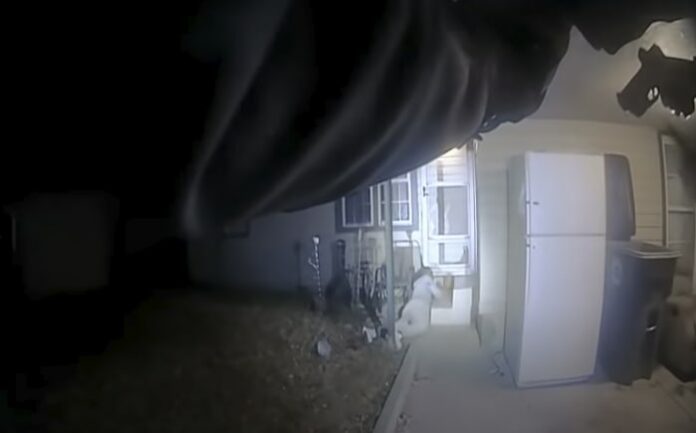 LAWTON, Okla. – Two former Oklahoma police officers have been charged with first-degree manslaughter in the fatal shooting of a Black man in December while responding to a 911 call of an alleged protective order violation.

Body camera footage released by the Lawton Police Department shows Sanders stands as he is confronted by police outside a Lawton home on Dec. 5, 2021. The 911 caller reported Sanders was waving a gun in the house and wouldn’t let a resident leave, according to authorities.

The video shows Sanders appeared from around a refrigerator, his hands were visible and he appeared to be holding a ball cap, which he moved from his right hand to his left. Sanders then moved partially behind the refrigerator. Sanders wasn’t armed, Cabelka said.

Hinkle shot four times at Sanders, who appeared to have his right hand raised above his head before falling to the ground. Sanders sat up with his hands above his head. Hinkle then fired seven more times.

Ronan also fired four times at Sanders, according to Cabelka, bringing the total number of shots fired at Sanders to 15.

Cabelka said no weapon was found on Sanders nor in the area where he was shot.

Gary James, an Oklahoma City-based attorney representing Hinkle, who is Black, and Ronan, who is white, said officers had repeatedly been called to the house because of Sanders, and evidence will show on the night of the fatal shooting they believed he was reaching for a weapon in his pants.

“Nobody is looking into the facts of this case,” James told The Oklahoman on Sunday. “These are good police officers.”

James said a gun was later discovered on a table in the living room where Sanders came out of.

“It really shocks the conscience when you have a chance to see Mr. Sanders literally doing whatever he could to try to save his own life, and these officers are operating with such callousness,” Merritt told KSWO-TV Channel 7 in Lawton.

Hinkle and Ronan were fired from the police department on Jan. 7, Lawton City Manager Michael Cleghorn said in a statement.

Hinkle and Ronan were released Friday on a $25,000 bond. They face a minimum of four years in state prison if convicted of the fatal shooting of Sanders. A hearing is scheduled for Aug. 1.

For copyright information, check with the distributor of this item, The Oklahoman.