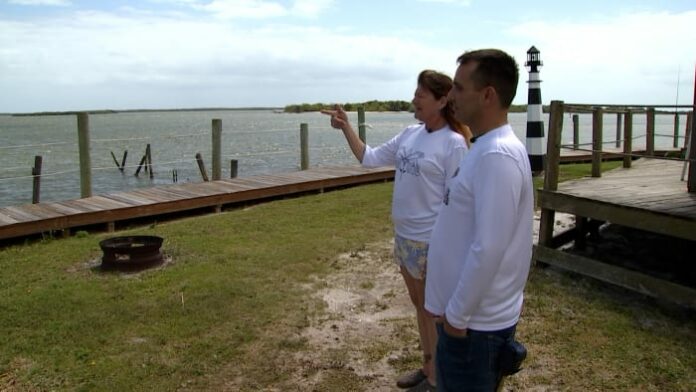 OAK HILL, Fla. – Lori Richards, and her husband Daniel, call their neighborhood a little piece of paradise. The Mosquito Lagoon RV Park in Oak Hill sits on the shores of the Indian River Lagoon.

“It’s very windy,” Lori Richards said, as she stood at the end of a long peninsula that sticks out into the river. “It’s the windiest place I’ve ever lived,” she laughed. “But it’s either wind or bugs. They call it Mosquito Lagoon for a reason.”

The couple are both native Floridians. They moved to the small community of about 40 homes because they loved the rural character of the area. They call themselves, and their neighbors, Lagoonies.

“Oak Hill is so unique because it’s virtually an untouched city as far as development goes,” Lori said. “In Florida that’s hard to find.”

She remembers an Indian River Lagoon lined with a carpet of seagrass and groups of manatees that would gather around the docks.

But things have changed. The river, still beautiful, has lost so much.

“We basically lost all the grass,” Daniel Richards added. “It’s become a desert out here.”

Lori Richards has always cared for the environment, but as she watched water quality in the river decline and proposed developments threaten her quality of life further, she decided to do something about it.

“Driving through the neighborhood I used to get upset about the trash on the side of the road,” she recalled. “So I decided instead of being upset, to do something about it. I got on the golf cart with my grabbers and a bucket.”

Richards said you can also find her pedaling around on her yellow three-wheeled adult trike. She started talking to her neighbors and learned many didn’t keep up with what was going on outside their small neighborhood.

“I understand why,” Daniel Richards said. “A lot of people don’t have time for it, families, work.”

“I care. It bothered me how everybody felt,” Lori Richards said. “They didn’t feel like they knew what was going on and because of that, they were upset. So I want to get the community talking.”

So again, she decided to do something about it. Richards set up a group on social media called Save Oak Hill, to keep her neighbors informed.

“I started Save Oak Hill because I went to a city meeting about the developments that are happening in the area and I noticed that a lot of the citizens were really upset. They felt like they weren’t being very informed on what was going on.”

Tony Prater lives nearby. “I feel like Lori is making a great contribution to the community,” he said. “She puts a lot of time into this.”

Prater nominated Lori Richards for the News 6 Getting Results Award. “Getting results, she’s definitely getting results,” he said.

Prater told us he moved from up north and appreciates the wildlife he sees in the area. He’s worried dense development will threaten what he’s come to appreciate.

“I’m not anti-development,” Prater said. “I just don’t want them to destroy the environment for progress.”

The Richards agree. They too say they’re not against development, they just want to see more thought go into planning.

“If we grow at an unmanaged pace it’s going to ruin a lot of the things we love out here,” Daniel Richards said.

“We need to take care of Oak Hill and build a good future,” Lori Richards said. “Together we can make a difference.”

Since this report, Richards has changed the name of the Facebook group to Oak Hill Community Concerns.

She said the name left the impression she alone could save Oak Hill. She said it will take a community, so she renamed the group.