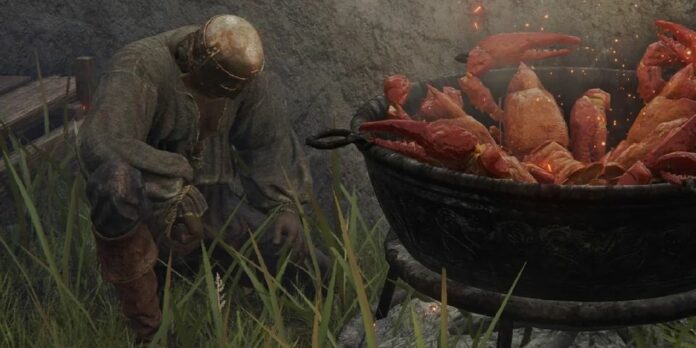 Players point out an important NPC in Elden Ring who it would be best to keep alive and find before finishing other quests later in the game.

FromSoftware has not only introduced players to its largest world to date in Elden Ring, but has also filled it with a host of new NPCs and quests to find. However, while some players might be quick to fight and kill everything in Elden Ring, there are numerous NPCs that can prove more useful alive than they do dead.

Some players have specifically pointed out the NPC Blackguard Big Boggart as one who fans should take special care not to kill or let die, as he can be incredibly useful as a merchant from very early on. Additionally, his questline should be finished quickly, as progressing far enough through Elden Ring can block players off from reaching the end of his mission and getting better rewards from it.

The main reason not to kill Blackguard Big Boggart is that he sells an important item called a Boiled Prawn as early as Liurnia of the Lakes, just outside the Raya Lucaria legacy dungeon. These Boiled Prawns and their upgraded Boiled Crab variant are a consumable item that will boost the player’s physical defense for a short time when eaten. For players having trouble beating Elden Ring‘s bosses, these consumables can be a massive help, as they can make combos or one-hit kills from enemies slightly less deadly.

In addition to the Boiled Prawns, Blackguard Big Boggart also has a questline that can take him from Liurnia of the Lakes to the Capital Outskirts, which is what unlocks the more powerful Boiled Crabs. This mission does need to be completed before finishing the Volcano Manor and defeating Elden Ring‘s God Devouring Serpent, however, otherwise the quest will no longer be available. For this same reason, players should at least wait until Blackguard Big Boggart has made it to Capital Outskirts before killing him for his gear or the bell bearing that grants access to his merchandise at the Twin Maiden Husks.

With the questline and the upgraded Boiled Crabs tied to the merchant’s survival, this makes Blackguard Big Boggart a unique merchant who shouldn’t immediately be killed, unlike most other merchants. Considering that merchants can be consolidated at the Twin Maiden Husks, killing the nomad NPCs for their bell bearings has become a regular occurrence to make buying items easier. However, Blackguard Big Boggart is proof that not all of Elden Ring‘s NPCs should be killed on sight to help simplify the exploration and shopping process, even if most can be killed with little consequence.