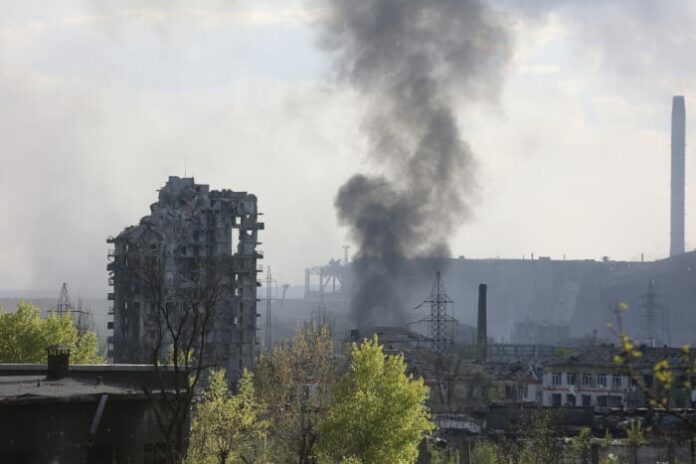 GENEVA – With the evacuation of some civilians from a steel mill besieged by Russian forces in the port of Mariupol, attention is turning to the fate of hundreds of Ukrainian troops still inside after weeks in the plant’s warren of underground tunnels and bunkers.

Counting both able-bodied and wounded among their ranks, their choice seems to be either fighting to the death or surrendering in hopes of being spared under the terms of international humanitarian law. But experts say the troops are unlikely to be afforded any easy exit and may have difficulty getting out as free men or even alive.

“They have the right to fight until they are dead, but if they surrender to Russia, they can be detained,” said Marco Sassoli, a professor of international law at the University of Geneva. “It’s simply their choice.”

Laurie Blank, a professor at Emory Law School in Atlanta who specializes in international humanitarian law and law of armed conflict, said injured fighters are considered “hors de combat” — literally “out of the fight” — and can be detained as prisoners of war.

“Russia could let the injured Ukrainian troops return to Ukrainian areas but is not required to,” she said.

The sprawling, seaside Azovstal mill is a key war objective for Russian forces as the last holdout of resistance in coastal southeastern Ukraine, after a grueling, obliterating siege of Mariupol.

The wives of at least two Ukrainian soldiers inside Azovstal have been in Rome pleading with the international community for an evacuation of the soldiers there, arguing they deserve the same rights as civilians.

Kateryna Prokopenko, whose husband, Denys Prokopenko, commands the Azov Regiment at the plant, told The Associated Press she went without word from him for more than 36 hours before finally hearing from him Wednesday.

He told her that Russian soldiers had entered Azovstal and “our soldiers are fighting, it is crazy and difficult to describe.”

“We don’t want them to die, they won’t surrender,” Kateryna Prokopenko said. “They are waiting for the bravest countries to evacuate them. We won’t let this tragedy happen after this long blockade.”

“We need to evacuate our men as well.”

Ukrainian authorities have also demanded that Russia offer the Azovstal soldiers a safe exit — with their arms.

But experts say it would be nearly unprecedented for them to be simply allowed to walk free, not least because they could take up arms again and possibly cause Russian casualties.

“It is unlikely that Russia would allow Ukrainian troops to leave the plant with their weapons and nothing in the law would require that,” Blank said via email.

Instead the Russian military has called on the troops inside Azovstal to lay down their weapons and come out with white flags. It says those who surrender will not be killed, in line with international law.

The commanders of the Ukrainian resistance at the plant have repeatedly rejected that, however. In one video recording from the plant, Sviatoslav Palamar, the Azov Regiment’s deputy commander, said his forces were “exhausted” but vowed that “we have to hold the line.”

In the event the Azovstal fighters were to be taken captive, it’s not clear whether Russia would uphold its commitments under international law regarding POWs, given its alleged previous violations of rules governing war conduct and a lack of evidence for how it has been treating Ukrainian soldiers it already has in custody.

International norms have allegedly been breached by both sides during two and a half months of war, as seen in evidence of execution-style killings of civilians that emerged following Russian withdrawals near Kyiv, and the desecration of corpses that may have been Russian troops outside Kharkiv.

Protections of POWs date back generations including to the 1863 Lieber Code, which was drafted during the U.S. Civil War. Moscow itself benefitted significantly from such rules during World War II, when Nazi forces applied them at times with respect to Russian detainees.

Under the Geneva Conventions, POWs “must at all times be humanely treated” and may not be “subjected to physical mutilation or to medical or scientific experiments” that aren’t justified for health reasons. Members of armed forces who are wounded or sick, meanwhile, “shall be respected and protected in all circumstances.”

Unlike civilians, prisoners of war may be forcibly sent to other countries in order to keep them from returning from the battlefield.

A 2016 interpretive document for the Geneva Conventions says medical treatment of POWs is fundamental and “the person of the soldier who is wounded or sick, and who is therefore hors de combat, is from that moment inviolable.”

There are differences of interpretation, however, over whether injured combatants may be targeted in war, said Sassoli, who was on a three-person team commissioned by the Organization for Security Cooperation in Europe that travelled to Ukraine in March.

The International Committee of the Red Cross plays a crucial and nearly exclusive role in conflicts around the world mediating between combatants on matters such as arranging prisoner swaps and monitoring detainee conditions. Among other things, the ICRC collects names of POWs and reports back to their governments and families.

Yet the ICRC has not said whether it has met with any POWs in Russian custody since the war began Feb. 24, a silence that Sassoli said could be a “bad sign.”

Asked by AP whether ICRC has visited any war detainees, spokesman Jason Straziuso said briefly, “The issue of prisoners of war is extremely important and we are closely engaging with the parties to the conflict on the topic.” He declined to comment further.

On Tuesday, Pascal Hundt, the ICRC’s chief in Ukraine, told reporters that only civilians were covered in a Russian-Ukrainian deal that led to the recent evacuations from Azovstal. And he expressed uncertainty that anyone else might get out.

“The ICRC has little leverage when it comes to reaching a cease-fire agreement, and it is up to the parties to find agreement and to get these people out,” Hundt said. “We’ll continue to push even if the hope is close to zero, we’ll just continue to push — and we stand ready to go there.”

Trisha Thomas in Rome contributed to this report.