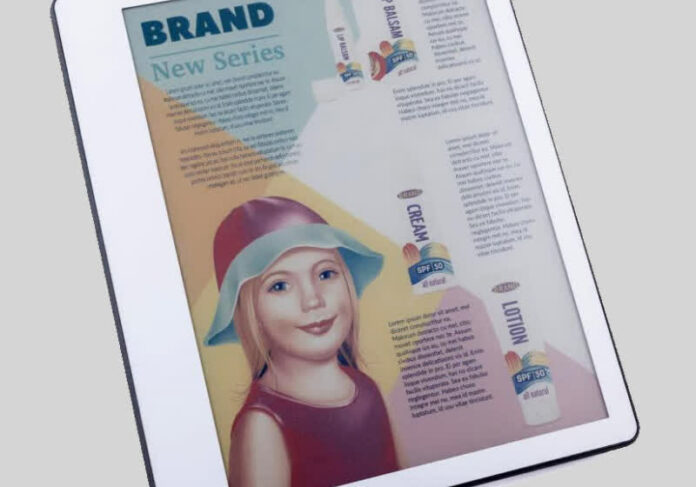 In brief: For years, E Ink has been trying to create better color electrophoretic (e-paper) displays that rely on ambient light rather than a backlight to produce an image. Now it’s getting closer to that dream with a new display that can update fast enough for stylus input, so it’ll be interesting to see if companies like Amazon and Kobo will use it in future e-readers.

This week, E Ink quietly launched its next-generation color ePaper display which is quite a significant upgrade over previous offerings. By far, the most important of the changes is the improved refresh times for updating the contents of the display — something that has limited the proliferation of e-paper displays in a variety of devices where they could provide better battery life and a viewing experience that’s less taxing on the eyes.

The new E Ink display is called Gallery 3, and it supports three color modes. To achieve the best color gamut, the update time is 1,500 ms. There is also a standard color mode that cuts the update time down to 750-1,000 ms, as well as a fast color mode that reduces that to as little as 500 ms. For reference, the first-generation Gallery display had a color mode where you had to wait around ten seconds for the screen content to be updated.

Interestingly, the new e-paper display achieves this while doubling the resolution from 150 pixels per inch (ppi) to 300 ppi. The full-color mode support over 50,000 colors, which is much better than the 4,096 achieved by E Ink’s Triton displays found on devices like the Boox Nova3 Color and PocketBook Color. And best of all, it can be used in devices with novel form factors such as foldables and rollables.

E Ink says its Gallery 3 display also supports stylus input with an update time of around 30 ms for black and white as well as some colors. To date, the company has sold over 130 million e-paper displays. It hopes this new display will allow companies to use e-paper in more devices where LCD or OLED panels have typically been used due to their high refresh rates and superior color reproduction.