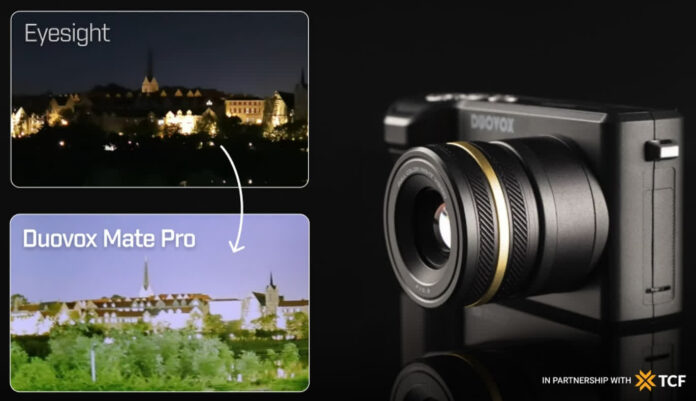 Bottom line: Low-light imaging specialist Duovox has launched a Kickstarter campaign for what it describes as the world’s most advanced true-color night vision camera. Impressively, the company already managed to smash its funding goal for the niche-class shooter in just one day.

At first glance, the Duovox Mate Pro appears to be little more than an ordinary – if not basic – point-and-shoot camera. Under the hood, however, is a Sony Starvis 2 1/1.8” back-illuminated CMOS image sensor capable of capturing video in 2K and stills (jpeg and raw) at 5MP (3,200 x 1,800 resolution).

Duovox went with a sensor featuring a low megapixel count but big pixels. The larger the photosite area, the more light the sensor can capture. The sensor Sony made exclusively for the Duovox Mate Pro has 244 percent bigger pixels than those used in Sony’s low-light leader, the a7s III.

Other noteworthy features include an f/0.9 aperture lens, integrated Wi-Fi, a 3-inch rear-facing touchscreen, four hours of battery life and up to 512GB of storage (via microSD expansion slot).

All of this results in a niche digital camera that is very good at taking photos in extremely low light environments, but not much else. That’s great if you’re a nighttime adventurer, content creator who prefers to work in low light or someone seeking a quality, around-the-clock security camera, but don’t expect it to excel in other general purpose use cases.

Those interested in backing the project can secure a camera backed by a one-year warranty in exchange for a $599 pledge. As mentioned, the campaign has already surpassed its funding goal and there are still 44 days to go. The first units are expected to ship to backers in October 2022.