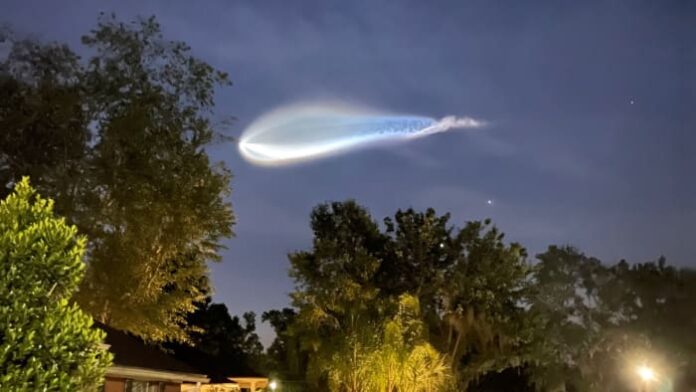 JACKSONVILLE, Fla. – A SpaceX Falcon 9 launch that sent 53 Starlink satellites into orbit this morning at 5:42 a.m. left some News4JAX scrambling to get photos of the unexpected object in the sky this morning.

Our newsroom was flooded with calls and messages asking what the bright light was that soared overhead.

The launch from Cape Canaveral could be seen at least as far north as Savannah, according to the photos we received.

SpaceX regularly sends these launches into orbit — but not often so early in the morning.

It was just the latest development in what was already a busy day for SpaceX.

Early Friday morning, a SpaceX Dragon capsule splashed down in the Gulf of Mexico near Tampa, Florida.

It safely brought back to Earth four astronauts who had ended their six-month stay on the International Space Station a little less than 24 hours earlier.

Many viewers sent us photos of what they saw in the sky Friday morning during the launch, asking for help to identify the streaking object. Rest assured, it was not aliens among us.

(At least not this time 👽 — but “the truth is out there.” Sorry, couldn’t help it. The inner sci-fi nerd came out.)

Many thanks to our Insiders who shared their images on SnapJAX. Many of them recognized the soaring object as a rocket launch. Here are a few of their photos: