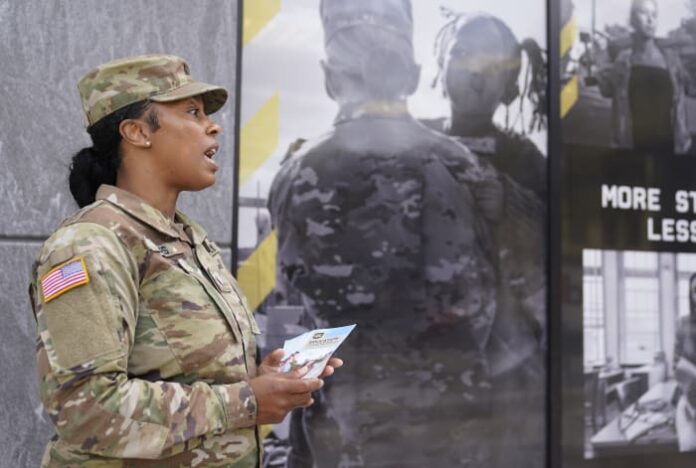 He approached Phillip Wallace, a 26-year old in torn jeans munching a doughnut, chatted him up a bit, exchanged phone numbers and handed him a pamphlet about joining the District of Columbia National Guard.

“Now I’m not going to be burning up your phone bothering you about this,” Forbes said in parting. “But you’ve got my number and you know where to find me if you’re interested.”

Wallace replied, “Yeah sure, definitely.” But he didn’t seem to be paying full attention.

The interaction, however brief and halting, represents a new era for the D.C. guard — a quietly critical force that has frequently found itself at the center of intense political debate, most recently over the historic security breakdown on Jan. 6, 2021.

It took about three hours for members of the D.C. guard to respond to Capitol during the insurrection by supporters of then-President Donald Trump, a delay that local officials blame on their lack of authority to deploy the guard. The whole issue has become meshed with Washington’s ongoing quest for statehood.

For more than a decade, the D.C. guard offices have been a semi-hidden presence — sheltered inside the D.C. Armory behind security checkpoints in an area of southeastern Washington with almost-zero foot traffic next to the abandoned hulk of RFK stadium.

But in March, the local guard opened its first proper recruiting office in the city since 2010. The commander, Maj. Gen. Sherrie McCandless, describes the move as a new push for visibility and an emphasis on the guard’s local connections at a time when many residents might be ripe for recruitment.

“It’s very much a walking city and it’s very much an oral-tradition kind of town,” McCandless, a former F-16 pilot, said. “We’re coming out of the pandemic. People are more mobile again and frankly a lot of people are trying to figure out what’s next.”

Recruitment chief Lt. Col. Amber Ellison says the sales pitch to potential recruits is that the guard offers many of the same benefits of full-time active military — discipline, education, lasting connections and training in highly marketable skills — for a fraction of the commitment.

They’re looking to recruit a specific slice of the population — 17-35-year-olds who see the appeal of a partial military commitment.

“You can serve your country and still keep your civilian job,” said recruiter Sgt. Jessica Jones, a officer with the Metropolitan Police Department.

Guardsmen are expected to devote one weekend a month, plus a two-week training stint every summer, with a six-year commitment plus two inactive years. For that, the entry-level pay rate starts at about $230 per month, plus myriad bonuses and enhancers depending on experience, education and specialization.

So far, spontaneous walk-ins to the new storefront are still rare and recruiters like Forbes and Jones make most of their contacts at high school and college job fairs or booths at large public events. But they say that for those who are intrigued by the initial proposal, the new storefront is an ideal, accessible location to make an appointment for the follow-up pitch.

“I just tell them my own story and exactly what I’ve learned and how I’ve benefitted,” Forbes said. “Once they learn what it’s about, it sells itself.”

And the renewed visibility gives them a chance to field basic questions from curious newbies.

“I hear the ‘Am I going to war?’ question a lot,” Jones said. “And women ask if they’ll have to shave their heads.”

The 2,200 strong D.C. guard contingent is regularly deployed in a supportive role — traffic control and security around Metro stations — during the multiple D.C.-specific events like the State of the Union address. It is also key in the air defense of the nation’s capital, with its own squad of 20 F-16s at Andrews Air Force Base. And D.C. guard pilots fly congressional delegations on overseas trips.

In recent years, the guard has become an emotionally charged topic as a symbol of a D.C.’s entrenched status as less than a state.

Mayor Muriel Bowser, D.C.’s top local elected official, must submit requests to deploy the guard to the Army secretary. The mayor says she operates as a de-facto governor, but is denied governor-specific authorities like National Guard control. Meanwhile the mere presence of the federal government makes the district a far more likely location for civil disturbances that might merit National Guard deployment.

One of those disturbances, the Jan. 6, 2021, riot when Trump supporters overran the Capitol building, served as a real-time example of those limitations. Bowser warned days in advance of the potential for violence. And when it became clear that the U.S. Capitol Police were overmatched by the crowds, Bowser couldn’t immediately deploy the D.C. guard. Instead crucial time was lost while the request was considered inside the Pentagon, and protesters rampaged through the building.

The issue had also flared up months earlier, in summer 2020, when violent protests against police brutality and systemic racism erupted in Washington and other cities. Trump accused Bowser of losing control of the capital and flooded Washington with a massive wave of guardsmen and federal agents.

Asked about the significance of the D.C. guard’s new visibility push, Bowser curtly stated, “It would be more significant if they worked for the chief executive of the city.”

She added, “But we enjoy a great relationship with the commanders.”

For the people in uniform, the debate over their chain of command is irrelevant. McCandless said that whether she’s taking orders from a governor, the Army secretary or the mayor, the mission is the same.

“All of my peers who work for governors, they have pretty much the same experience that I do,” she said.