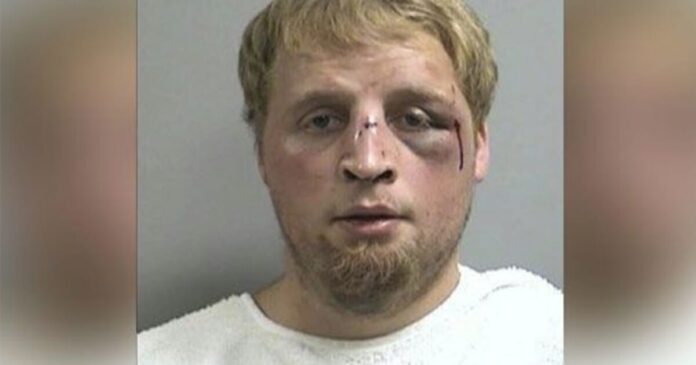 When a couple returned home, they witnessed a shocking scene involving their infant daughter and the babysitter. But, before the police could even arrive, dad took matters into his own hands.

Jayson Newlun of North Kansas City was a trusted family friend who was staying with a Missouri family in their home on the 8000 block of North Hickory Avenue. When the couple wanted to go to the store without a baby in tow, they had no problem leaving their daughter, who was napping, in Newlun’s care, KMBC reports. Sadly, that would turn out to be a big mistake for all involved, which her parents would learn when they returned home only to stumble upon a nightmare of the worst kind.

After the 26-year-old man was left alone to babysit the napping one-year-old girl and the parents headed off to the store, Newlun decided to use his time alone with the baby to sodomize the infant in a terrible act of betrayal against not only the little girl but the parents who had entrusted their child to his care as well. Sickeningly, he wasted no time getting down to his dirty business. As fate would have it, however, the child’s mother realized she had forgotten something and the parents were forced to return to their Clay County, Missouri, home earlier than expected, KCTV5 reports.

Only 5-10 minutes after leaving, the mother was home again, and something must not have felt right when she walked through the door. Where was Newlun? He wasn’t on the couch where he had been when she left. Then, she noticed her daughter’s door was open. Going to investigate, the mother walked into her child’s room only to discover a sickening and frightening sight.

Flying into an understandable rage, the angry father stormed into the room, tackled the pedophile to the floor, and began punching him repeatedly before pulling out a dresser drawer and brutally beating the abuser with it as well. As Newlun laid on the ground screaming, he drew the attention of people nearby. Eventually, a neighbor arrived and stopped the enraged father from pummeling the predatory monster, ripping him off of the pedophile.

When police arrived, a beaten and bloodied Newlun was arrested and taken to the Clay County Detention Center. His bond was set at $250,000, and he was charged with first-degree statutory sodomy. When asked why he committed the heinous act, he reportedly said he didn’t know but agreed that he deserved a harsh punishment. “I hope you go down for this,” the mother told Newlun as she waited for the cops to arrive at her home, to which she told police he responded, “I do, too.”

Sadly, there simply isn’t a punishment harsh enough for such a crime committed against such a small child. But, hopefully, prison will not be a very safe place for Jayson Newlun after he is prosecuted and sentenced for his crimes against an infant. After all, what he did is every parent’s worst nightmare, and it’s very likely that, after having entrusted him with the care of their child, the girl’s parents are feeling a deep sense of guilt, regret, and responsibility in addition to trying to cope with what’s happened to their child. So, regardless of what he gets, he’s getting off easy for what he’s done.

It is truly unfortunate that the father of the child didn’t have more time to deal with Newlun before the neighbor pulled him off since this kind of criminal can’t be rehabilitated. Even with professional help, pedophiles like Newlun tend to strike again when they regain their freedom. Hopefully, a few nightly visits from the vilest criminals prison has to offer might deter this monster from ever doing this again. Of all the crimes an adult can commit, abuse against a child has to be the most abhorrent. To steal a child’s innocence for one’s own sexual pleasure is truly a sickness of the worst kind, proving there are monsters among us and a parent can never be too careful when deciding who to entrust with their child, even for the shortest amount of time.