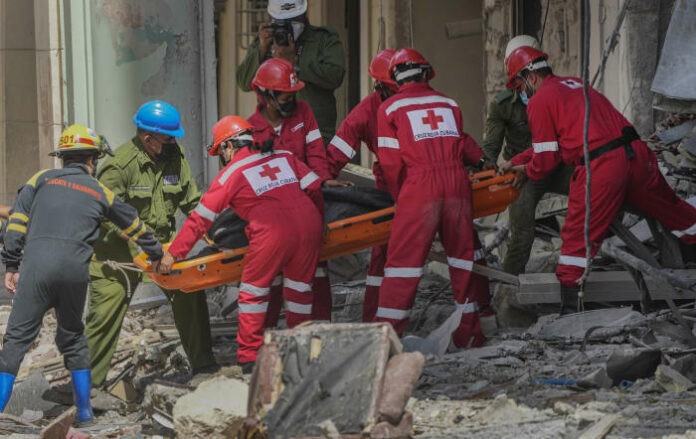 HAVANA – Crews worked through a second night searching for victims of a hotel explosion that killed at least 27 people in Cuba’s capital and left more than a dozen missing amid the rubble.

The Hotel Saratoga, a luxury 96-room hotel in Old Havana, was finishing renovations when an apparent gas leak produced a massive explosion on Friday.

Just steps from Cuba’s capitol, the Saratoga’s façade was sheared off, burying workers inside and apparently passersby outside under concrete and twisted metal. The explosion came in the late morning when the streets and plaza in front of the stately hotel would have been full of pedestrians.

On Saturday evening, Dr. Julio Guerra Izquierdo, chief of hospital services at the Ministry of Health, raised the death toll to 27 with 81 people injured. The dead included four children and a pregnant woman. Spain’s President Pedro Sánchez said via Twitter that a Spanish tourist was among the dead and that another Spaniard was seriously injured.

Some 37 people remained hospitalized, according to the Health Ministry.

At least one survivor was found early Saturday in the shattered ruins.

Authorities said the cause of the explosion was still under investigation, but believed it to have been caused by a gas leak. A large crane hoisted a charred gas tanker out of the rubble Saturday.

The explosion is another blow to the country’s crucial tourism industry.

Crews busily worked to clean up the surrounding streets and by late Saturday, substantial pedestrian traffic had resumed. Some nearby buildings were also heavily damaged by the explosion that blew out windows and rattled walls.

Even before the coronavirus pandemic kept tourists away from Cuba, the country was struggling with tightened sanctions imposed by former U.S. President Donald Trump and kept in place the Biden administration. Those limited visits by U.S. tourists to the islands and restricted remittances from Cubans in the U.S. to their families in Cuba.

Tourism had started to revive somewhat early this year, but the war in Ukraine deflated a boom of Russian visitors, who accounted for almost a third of the tourists arriving in Cuba last year.

Attention began to shift to an official visit by Mexico President Andrés Manuel López Obrador, who arrived in the capital Saturday night. López Obrador was wrapping up a five-country tour that began in Central America.

Cuba President Miguel Díaz-Canel visited Mexico during its independence day celebrations last year. López Obrador has recently spoken out against the apparent U.S. government intention of excluding Cuba, Venezuela and Nicaragua from the Summit of the Americas it will host in Los Angeles in June.