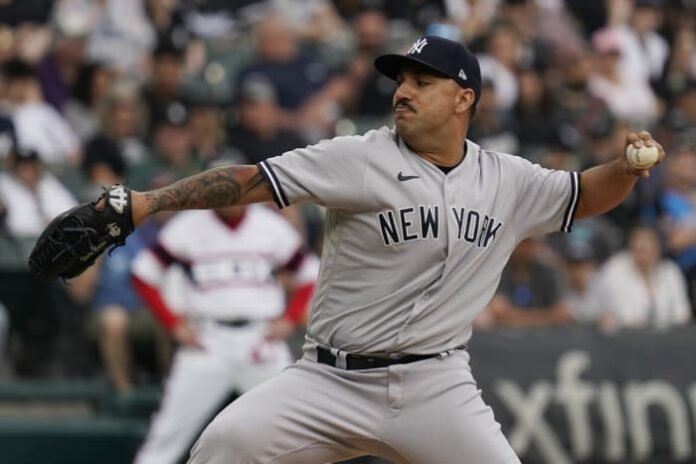 New York managed just two hits: a second-inning single for Isiah Kiner-Falefa and a two-run homer by Joey Gallo in the ninth. But it was more than enough, thanks to the crafty Cortes (2-1).

The 27-year-old left-hander, who carried a no-hitter into the eighth in his previous outing against Texas, allowed three hits, struck out seven and walked none in another brilliant performance. He has permitted two runs or fewer in each of his seven starts this year.

Since his first big league outing of last season, on May 30, 2021, Cortes has an AL-low 2.44 ERA over 133 innings. He has allowed three runs or fewer in 16 straight starts, matching Luis Severino in 2018 for the second-longest such streak in franchise history.

Clay Holmes finished the four-hitter for New York’s 18th win in 21 games. The major league-leading Yankees took three of four in the series.

Kopech (0-1) pitched six innings of one-hit ball for Chicago. The right-hander had five sharp innings — and one real bad one.

New York got to Kopech for three runs in the second after he retired the first two batters, making the most of four walks, a wild pitch and Kiner-Falefa’s single to left. Aaron Hicks and DJ LeMahieu each walked with the bases loaded, and Jose Trevino scored on the wild pitch.

Kopech’s shaky stretch provided more than enough run support for Cortes, who retired 15 in a row after Luis Robert extended his hitting streak to 13 games with a first-inning single.

Adam Engel homered for Chicago with one out in the eighth, but Cortes retired the next two batters. Pinch hitter Yasmani Grandal flied out to the warning track in right for the second out.

Yankees: Manager Aaron Boone said the team should know more about C Ben Rortvedt’s situation at some point this week. Rortvedt was working his way back from a right oblique injury when a knee issue popped up. “It’s something he’s dealt with in the past,” Boone said. “So we’ll see. It could be some kind of surgical procedure that he may have to get.” … RHP Domingo Germán (right shoulder impingement) is scheduled to start throwing live BPs this week. Boone said Germán will be built up as a starter. … OF Tim Locastro (left lat strain) is progressing pretty well in his rehab, Boone said.

White Sox: 3B Yoán Moncada was out of the starting lineup after going 4 for 13 with two homers in the first three games of the series. Manager Tony La Russa said it was just a day off, and Moncada was available off the bench. … La Russa said RHP Lucas Giolito (COVID-19 IL) is feeling better, but he isn’t sure when he will return to the rotation.

Jay Cohen can be reached at https://twitter.com/jcohenap