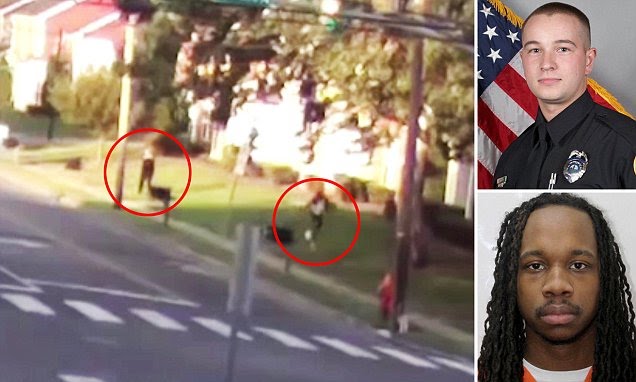 “Now this man is out and able to fully lead his life when Daniel Hambrick is gone and his mother is left to weep for him.”

Nashville, TN — A disturbing trend has been happening for years among police in America in which they are shooting people in the back as they run away. One of these victims to be publicly executed for running from police was 25-year-old Daniel Hambrick of Nashville. His execution by officer Andrew Delke was caught on a graphic video — and the officer was actually charged with murder.

Two years later, however, after the case died out of the headlines, in 2021, we learned that Delke’s trial will not be taking place. He was given a plea deal in the case and pleaded guilty to the lesser charge of voluntary manslaughter, instead of murder. He was sentenced to three years in jail for executing Hambrick but in true blue privilege fashion, he was quietly released this week after serving only half of his sentence.

Daniel’s mother Vicki Hambrick was shocked upon hearing the news as his release came a month before he was even supposed to be considered for an early release.

“It is very hard to accept the fact that he wasn’t convicted by a jury of his peers. It’s very hard to accept that ridiculous plea, which never should have been accepted in the first place but was accepted, and was only required to serve a very short amount of time for murdering Daniel Hambrick,” Nashville NAACP President Sheryl Guinn said. “Now this man is out and able to fully lead his life when Daniel Hambrick is gone and his mother is left to weep for him.”

“She (Vicki) has been disrespected on every front regarding this case,” Guinn said. “I don’t know of anything that can be said to console her. I think that the only thing we can do at this point is to elect officials that will actually have our best interest at heart.”

As we reported at the time, Delke became the first officer in the entire Metropolitan Nashville Police Department’s history to be charged with shooting someone while on duty.

Hambrick was shot and killed during a traffic stop in North Nashville on July 26, 2018.

According to court documents, Delke was pursuing a white Chevy Impala that day when he lost sight of it. While driving through the neighborhood, looking for the Impala, Delke “mistook a different white four-door sedan for his target vehicle” in an apartment parking lot. When Delke pulled into the parking lot, Hambrick took off running — which is not a crime. Police say Delke saw Hambrick holding what was described as a “dark object” in his hand.

As the graphic video shows, never once does Hambrick attempt to harm officer Delke. In fact, he only looks back once before continuing to run.

When Hambrick rounds a corner, the camera angle shows Delke pursuing him and when we look closely at the video, it appears that there is a dark object in his hand.

As the two run past a tree, Delke opens fire on the fleeing man and he drops dead on the grass.

Prosecutors did not dispute the fact that Hambrick was holding a gun. However, they disputed Delke’s attempt to claim self-defense by noting in the arrest warrant that Delke stopped running after Hambrick, took aim as Hambrick continued to run, and shot him in the back.

The video was so graphic that three Metro officers contacted local reporters at the time at WSMV to let them know that it does not show enough evidence to justify Delke killing Hambrick.

The three officers spoke on the condition of anonymity to WSMV and noted that the video does not show Hambrick demonstrating any threat to the officer or to people nearby.

Unfortunately, she will not get it.

Below is this graphic footage showing just how deadly it can be to run away from police.