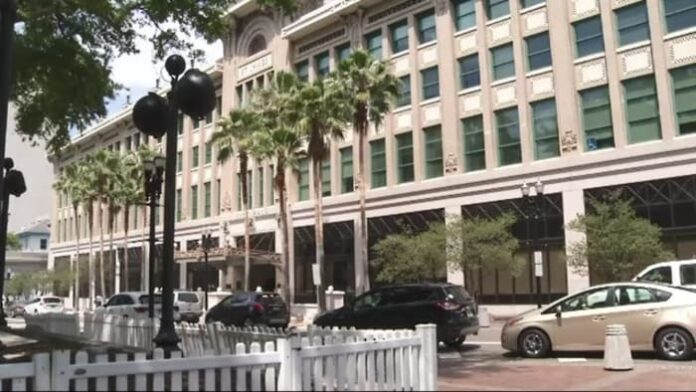 The redistricting process, which occurs every 10 years, has come under fire from the NAACP, American Civil Liberties Union and the Northside Coalition of Jacksonville. What’s controversial to those groups was approved nearly unanimously in council.

The full Jacksonville City Council meets every other Tuesday — 19 elected members who conduct Duval County business, including redrawing district lines based on census results once a decade.

Four of the districts have a high Black population. The rest are heavily white.

“Jacksonville is a growing and diverse city,” said Ben Frazier, president of the Northside Coalition. “The 2020 census showed that just over half of the residents are racial or ethnic minorities. And that’s what a lot of people are starting to get worried about.”

The suit claims the districts are “packed” unnecessarily and that they did not change significantly following the latest census results.

“We have been underserved, literally for generations, and it’s time for that to change, and this is one of the ways we can change it,” Frazier said.

Kent Justice: “Seven out of 19 city council members, so that’s roughly the percentage you just talked about in terms of the ratio among the races. Why is that not good enough? Or why does that not allow the Black voice to be heard when it comes to governing in the city of Jacksonville?”

“Are you suggesting, for example, that because we have seven Black city council people that that’s enough? I suggest No,” Frazier responded. “What we need is good city council people who are going to work in the best interest of all the people and right now I don’t see that happening.”

Councilman Rory Diamond voted against the maps in redistricting. He is a Republican, and he said the process was designed to keep the status quo and protect incumbents.

Councilwoman Brenda Priestly Jackson is a Black attorney who said during debate on the issue that she strongly supports keeping districts 7, 8, 9 and 10 as districts where Black voters can elect their preferred candidates.