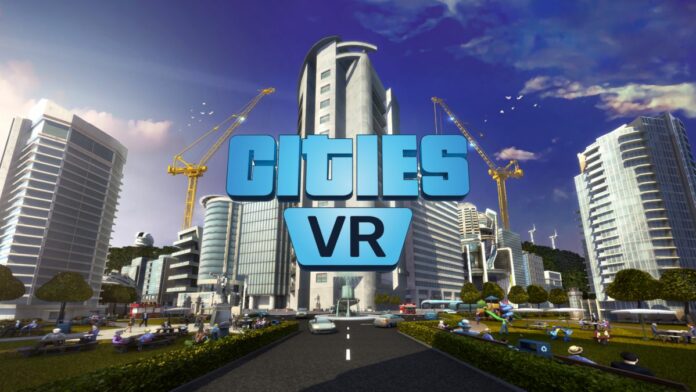 The hit city-simulator game Cities Skylines is coming exclusively to the Quest 2 as Cities: VR and we can’t wait to play it.

At the Meta Quest Gaming Showcase, we were treated to a brand-new gameplay trailer for the title. We saw a player take on the role of mayor to construct buildings and bridges, and create their dream city.

But if you’re already desperate to know more, we have some good news; we caught up with one of the game’s developers (the Cities VR live producer Linda Kiby Zetterman) to find out what players can expect when the title drops on April 28.

More power than ever

Those of you that have played Cities Skylines will be familiar with the mayoral responsibilities you’ll be managing. There are utilities to sort out, transport routes to create, and taxes to collect – all of which have to be balanced to keep your city’s residents happy.

But, Zetterman explained that players are “less of a mayor and more of a god with Cities VR.”

“With the Quest 2 headset on you’ll be stood above it all, looking down at your city below – and you’ll have control over everything.”

This top-down perspective is nothing new for city-simulators, but with the immersive nature of VR, we’re not surprised that the player’s view of the world could lead them to feel like a deity – especially as you can create structures with the push of a button and carve out the landscape with your hands

What’s more, Zetterman explained that this sandbox experience won’t be like some VR games where there’s a single narrative to complete. Cities: VR will instead offer players numerous ways to replay the title so they can experience the power trip it provides over and over.

“While it is smaller on the Quest 2 right now than Cities: Skylines currently is, it still offers a tremendous number of reasons to return. There are different starting locations to try out, and obviously, there’s that drive to see if you can improve  and make an even better city than you did before.”

You could also try and create increasingly more terrible cities but to each their own.

While CIties: VR will be smaller in scope than Cities: Skylines, Zetterman assured us that multiple free updates coming after launch will steadily expand the scope of the title.

The first update is already set in stone (it includes a few fixes and upgrades to help everything run a bit smoother) but, much like how players have control over their cities, they’ll also shape the kind of content that launches in the future.

If players have particular issues they want to be addressed or are calling for certain content to be added to Cities: VR, Zetterman and her team want to use updates to address their concerns.

And while players are currently confined to the Quest 2, there’s a chance that those of you with an HTC or Valve headset could give it a try in the future.

Zetterman didn’t make any promises but did say that we could see Cities: VR launch on other platforms at some point – perhaps we’ll even see it on the PSVR 2.