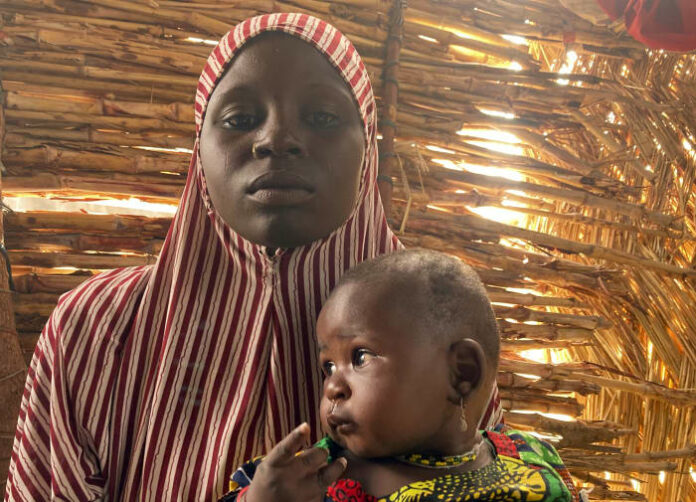 MAIDUGURI – Iza Ali’s five children are still waiting to eat at 3 p.m. It’s not the first day that the family has gone without food since they fled extremist violence in northeast Nigeria six years ago.

She and her husband scrape together $3 a day, but it’s rarely enough to feed the family of seven. Often they scavenge for greens outside the Jere displacement camp where they live on the outskirts of Maiduguri.

“If we don’t see food, we drink water,” the 25-year-old mother says, her 4-month-old tugging at her dress. “Only God can help us.”

Aid agencies are warning that families like hers are increasingly at risk amid lower food production this year in Nigeria and as global humanitarian funds are being diverted as a result of the war in Ukraine.

Acute malnutrition has soared from affecting 1.4 million children in the northeast to 1.7 million in the last year, according to Priscilla Bayo Nicholas, a nutrition specialist with the U.N. children’s agency in Nigeria’s Borno state. In 2017, the number was just 400,000.

“If we don’t treat them, we will lose these children,” she warned.

Like Ali, many in northeast Nigeria have had their livelihoods destroyed since 2009 when extremists started waging an insurgency in Africa’s most populous country. The attacks carried out by Boko Haram and its offshoot — the Islamic State in West Africa Province — have killed more than 35,000 people in Nigeria and neighboring Chad, Niger and Cameroon while at least 2.1 million people have been displaced, according to U.N. figures.

U.N. Secretary-General Antonio Guterres met with displaced Nigerians last week while in Maiduguri as he wrapped up his West African three-nation tour in a “visit of solidarity with the victims of terrorism.”

“I saw smiles. I saw enthusiasm. I saw hope,” Guterres said. “And this is where we must invest,” he added, calling for an additional $351 million as part of the overall $1.1 billion for the U.N. humanitarian response plan for Nigeria.

Those who are displaced, however, say their hopes are dimming each day.

At the Banki displacement camp near the Cameroonian border, U.N. staffers are caring for more than 50,000 people displaced by violence. The camp is surrounded by heavily armed soldiers, and filled with women and children whose futures are uncertain.

Patched with bandages and with visible wounds, children suffering from acute malnutrition lay on beds under the watchful gaze of their mothers and caregivers inside the camp’s nutrition center.

Here 20-month-old Mbolena rubs his swollen stomach, which hangs over his tiny body and visible veins. His mother Isa Ali says she’s thankful that at least “he is feeling better now.” Beside his bed, Maryam Hassan cuddles her severely wounded baby passionately as he clings to life.

Many more children are trapped in places that humanitarian workers are unable to access because of security risks, Nicholas told The AP.

Gomezgani Jenda, with Save the Children International’s Nigerian office, said conflict exacerbates the problems already faced by children in the region.

“The humanitarian situation affecting children in these areas continues to be a challenge with an urgent need that is even greater than before,” Jenda said.

In many displacement camps in Nigeria, government agencies provide food while aid agencies mostly focus on educational and health needs. But the amount that comes from the Nigerian government relief agency every two months rarely last more than a few days, said Mala Bukar, chairman of the Jere camp.

The nation’s ministry of humanitarian affairs did not respond to an inquiry from The AP.

Nigerian authorities have started closing some of the displacement camps as part of efforts to return people to their hometowns abandoned in a war that the nation’s leader President Muhammadu Buhari said last week was “approaching its conclusion.”

More than 50,000 Islamic militants have surrendered, according to the Nigerian military. However, the International Crisis Group has said that the most dominant faction, ISWAP, is “consolidating its grip on new rural areas,” in parts of Borno state.

Ali wants the violence to stop there so she and her husband and five children can return home and farm again. However, impending attacks haunt her, so she remains displaced.

“We want to go back,” she said. But only “if the bush is cleared and there are no Boko Haram members that will kill us.”