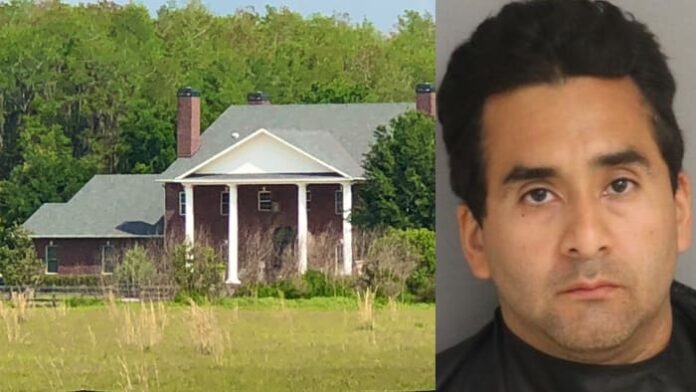 OSCEOLA COUNTY, Fla. – A chef who worked at an elite boarding school for troubled teen girls is accused of molesting or abusing four juveniles who lived there, court records show.

Manuel Rodriguez, 40, offered girls nicotine vape or marijuana edibles in exchange for their silence about the abuse, according to arrest records.

Rodriguez has pleaded not guilty.

The alleged crimes occurred at Providence Pass, a faith-based boarding school that’s described on its website as “a world-class preparatory school for teenage girls who struggle.”

The school assists girls ages 13 to 17 with issues such as conduct disorders, eating disorders, depression, and mild substance abuse, according to its website. Some students have paid more than $7,000 per month to attend, court records show.

As Rodriguez is held in the Osceola County jail without bond while awaiting trial, the Osceola County Sheriff’s Office said it continues to actively investigate the case and is looking into the possibility that there may be additional victims.

“As an organization, we are heartbroken at the recent arrest of one of our former staff members,” Providence Pass officials said in a statement. “The school is fully cooperating with law enforcement, and we are completely shocked at these extremely serious allegations.”

In early December, a 14-year-old girl disclosed to her therapist at Providence Pass that she had been sexually abused by Rodriguez starting shortly before Thanksgiving, court records show.

School officials contacted law enforcement within two days of learning about the allegations, according to the sheriff’s office.

According to court records, as Rodriguez and the 14-year-old walked down a long driveway from the Colonial-style boarding house to the mailbox, the teen claims Rodriguez talked about how he had done “sexual things” with girls in the past.

While returning to the house, the girl told sheriff’s investigators that Rodriguez “began touching her face and thighs.”

After Thanksgiving break, the girl said she followed the chef into the garage to get some food. There, she claims Rodriguez touched her rear end and thighs.

The girl also claimed Rodriguez made her touch his penis on top of his clothes, according to arrest records.

Rodriguez later brought the girl a nicotine vape, which she claims she flushed down the toilet because she would get in trouble for it, court records state.

“I’m not sure I can trust you, but you can’t tell anyone about this,” Rodriguez allegedly instructed the girl.

The 14-year-old told investigators she had spoken with other students who claimed they had also been abused by Rodriguez, prompting authorities to interview more students.

A 16-year-old told detectives Rodriguez groped her over her clothes while the two were alone together inside the boarding house.

“You’re literally the most beautiful person I’ve ever seen. I wish my wife had your body,” Rodriguez allegedly told the teen.

Later that day, the 16-year-old claims Rodriguez placed her hands on his penis as the two rode alone together in a van to deliver food to other students at the school building located about 20 miles away from the boarding house in downtown Celebration.

“[Rodriguez] offered [the victim] a nicotine vape if she didn’t say anything to anyone,” the arrest report states. “He also promised her edibles on Christmas. [Rodriguez] never gave them to her because he got fired before this.”

A third teen told investigators Rodriguez entered her darkened bedroom around 10 p.m. one night and “laid on her for about five minutes” while “playing with” her breast, according to court records.

A fourth teen claims Rodriguez brushed his hand across her rear end on at least two occasions.

“When she went to bed, he would kiss her forehead,” the arrest report states. “This was when they were in Room 5 and she was having a rough day.”

Providence Pass owner William Del-Giudice told sheriff’s investigators that staff members were prohibited from being alone with juvenile females, including in bedrooms, and male staff were required to remain only in common areas of the house.

Del-Giudice said Rodriguez was never allowed to go on walks with any juvenile females and could only drive them in the van if three or four other girls were present, court records show.

According to court records, Del-Giudice located security video showing Manuel and a juvenile enter the garage alone together. It is unclear from the report whether that juvenile is one of the alleged victims.

“We take the safety of children very seriously, and we have zero tolerance for child abuse of any kind,” Providence Pass officials said in a statement to News 6. “As a matter of policy and in accordance with state laws, Providence Pass reports all suspicions of potential child abuse to the authorities. We carefully interview and screen our employees and volunteers, and our team works to maintain child protection policies based on best practices nationally and Florida State law.”

School not regulated by Florida DCF

Providence Pass is not regulated by the Florida Department of Children and Families since it is a faith-based boarding school.

Instead, residential childcare facilities claiming a religious exemption must be registered through The Florida Association of Christian Child Caring Agencies, or FACCCA.

Under state law, such facilities must provide FACCCA with the names of all personnel and “attest to the good moral character” of those staff members by providing proof of compliance with state-mandated background screenings.

FACCCA Executive Director Matthew Higgins did not respond to numerous emails and voicemails from News 6 inquiring whether Providence Pass was properly registered and had fulfilled screening requirements related to Rodriguez.

Rodriguez had not been charged with any previous crimes in Florida prior to his recent arrest, according to criminal history records obtained by News 6 from the Florida Department of Law Enforcement.

News 6 could not immediately determine whether Rodriguez had ever been arrested in other states.

Neither Del-Giudice nor Providence Pass’s legal representatives responded to specific questions from News 6, including whether other staff members were inside the boarding house at the time of Rodriguez’s alleged crimes.

“We believe that transparency, child safety, and accountability are essential, and we are fully committed to operating in a safe and responsible manner,” Providence Pass officials said in a statement.

Although DCF does not license Providence Pass, the state agency was contacted after abuse allegations surfaced, according to court records.

“The Department investigates all reports of abuse or neglect involving children who are allegedly maltreated by their parents or caregivers,” a DCF spokesperson told News 6. “Investigations are confidential per [state law].”

Each count is a second-degree felony punishable by up to 15 years in prison.