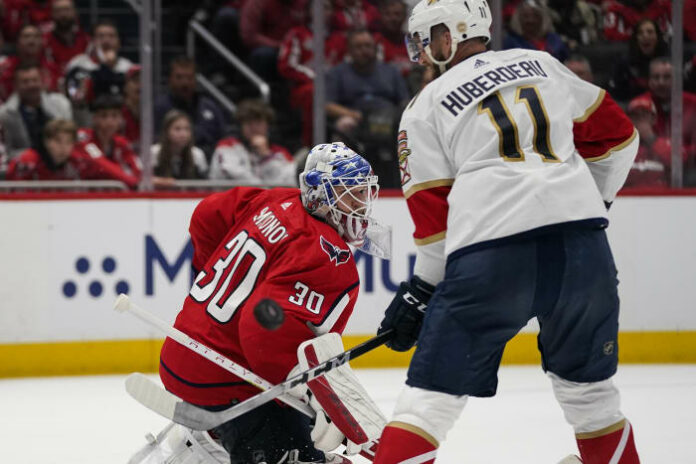 WASHINGTON – Ilya Samsonov rebounded after allowing an early goal, and the Washington Capitals bounced back on Saturday to show they can very much hang with the Presidents’ Trophy-winning Florida Panthers.

Samsonov made 29 saves, Alex Ovechkin scored a power-play goal and assisted on another and the Capitals blew out the Panthers 6-1 in Game 3 to take a 2-1 lead in the first-round series. Chants of “Sammy! Sammy!” gave way to “Ovi! Ovi! in the third period of the convincing victory.

Game 4 is Monday in Washington.

T.J. Oshie deflected Ovechkin’s shot for one power-play goal, and Marcus Johansson, Trevor van Riemsdyk and Garnet Hathaway also scored for the Capitals, who shook off a 5-1 loss in Game 2 and an early deficit in Game 3 behind the play of their new starting goaltender and a stingy effort that stymied the NHL’s best regular-season offense.

Samsonov got the nod to replace Vitek Vanecek in net after stopping all 17 shots in relief Thursday. He got off to a rough start, giving up a goal to league MVP candidate Jonathan Huberdeau less than three minutes in — then stopped every shot he saw the rest of the way.

With Samsonov the backbone at even strength and short-handed, Washington’s penalty kill improved to 9 of 9 against Florida, which ranked fifth on the power play this season at just under 25%. The Panthers also led the league in scoring at more than four goals a game.

But this series against an opponent with more experience in postseason hockey — seven players remain from Washington’s 2018 Stanley Cup championship — has been another rough lesson for the Panthers about how to win the playoffs. Ill-advised penalties by top-pairing defenseman Mackenzie Weegar and Huberdeau paved the way for the power-play goals, a missed defensive assignment opened the door for Johansson’s and a turnover in the corner led to van Riemsdyk’s.

Similar mistakes cost Florida in the first round last year: a loss to Tampa Bay on the way to the Lightning’s second of back-to-back titles. Only this time, the Panthers were expected to make a deep run after compiling an NHL-best 122 points on 58 victories in 82 games.

If they don’t win three more within the next eight days, it’ll go down as another disappointment for a franchise that hasn’t advanced in the playoffs since 1996 and entered the postseason as one of the favorites to hoist the Cup.

The Eastern Conference eighth-seeded Capitals improved to 4 of 12 on the power play in the series. Their victory guaranteed at least two more home playoff games this spring.

NOTES: John Carlson had an empty-net goal with 4:20 left. … Ovechkin’s goal was his 72nd in the playoffs, tying him with Patrick Marleau and Esa Tikkanen for 14th on the career list. His 28 power-play goals are tied for seventh. … Capitals right winger Tom Wilson missed a second consecutive game with a lower-body injury. … Connor McMichael made his NHL playoff debut, replacing Brett Leason, who took Wilson’s spot in Game 2 and skated just seven minutes.