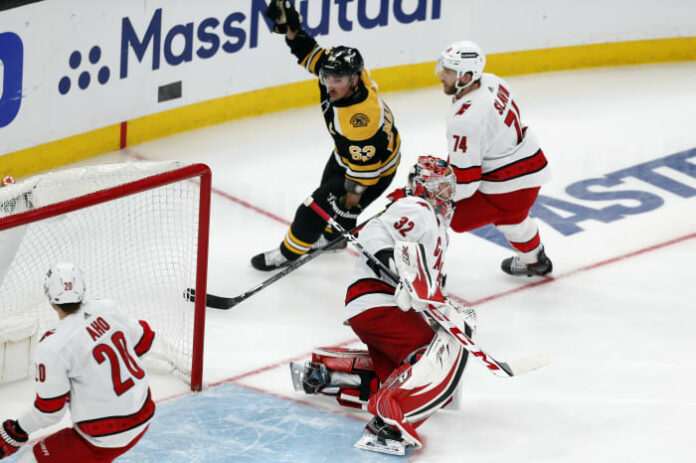 BOSTON – Brad Marchand scored one goal and assisted on another, and Jeremy Swayman stopped 23 shots to lead the Boston Bruins past the Carolina Hurricanes 5-2 on Thursday night and send their first-round playoff series to a decisive seventh game.

The home team has won all six games in the series so far — an edge for Carolina, which will host Game 7 on Saturday. The winner will play either the Penguins or Rangers in the Eastern Conference semifinals; Pittsburgh leads that series 3-2 heading into Game 6 on Friday night.

Two days after losing 5-1 at Carolina — their third blowout loss on the road — the Bruins returned to the TD Garden for what could be the last home game for future Hall of Famer Patrice Bergeron. The Bruins captain has declined to talk about his future during the season.

Andrei Svechnikov scored twice and Antti Raanta made 29 saves for the Hurricanes, who have won three games by a combined score of 15-4 and lost three by a total of 14-6.

Charlie Coyle also scored for Boston, and Erik Haula and Derek Forbort added third-period goals before Curtis Lazar backhanded the puck into the empty net with 4:17 to play.

Marchand broke a scoreless tie 46 seconds into the second period, taking a long cross-ice pass from Connor Clifton and skating to the right circle before wristing it over Raanta’s glove.

Coyle gave the Bruins a 2-0 lead in the last two minutes of the period, poking in the trickling rebound of David Pastrnak’s one-timer. Svechnikov made it a one-goal game early in the third before Haula and Forbort gave Boston back its cushion.

Svechnikov’s second goal came with 2:30 left during a power play for a double minor to Marchand for spearing.

In an 18-year career, all of it with Boston, Bergeron has scored 400 goals with 582 assists and won the Selke Award as the best two-way forward four times. He won the Stanley Cup in 2011 and went to the Final two other times.

The 36-year-old Canadian is unsigned for next season.

NOTES: Bruins defenseman Hampus Lindholm returned after missing the last three games after a hit to the head. He led the team in ice time. … Coyle also had an assist and Tomas Nosek had two assists for Boston