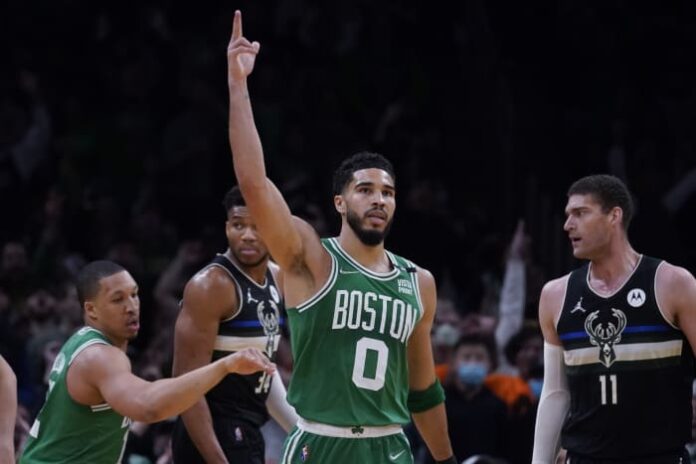 BOSTON – There was a moment during the Celtics’ series-opening loss to the Bucks when it seemed as if Jaylen Brown would never make a shot.

Brown scored 25 of his 30 points in the first half, and Boston beat Milwaukee 109-86 on Tuesday night to even the Eastern Conference semifinals at one game apiece.

“It’s the playoffs. That’s it,” Brown said. “We can’t let one game kind of dictate how this series goes. We wanted to be aggressive from the gate.”

Brown shook off a dismal shooting night in Game 1, going 9 for 10 in the first half, including 5 for 5 from the 3-point line. Jayson Tatum added 19 points and eight assists. Grant Williams finished with 21 points. Al Horford had 14 points and 11 rebounds.

“We wanted to come and play like our season was on the line and we did,” Brown said.

The series doesn’t resume until Game 3 on Saturday in Milwaukee.

Boston finished 20 of 43 from beyond the arc and scored 24 points off 16 Milwaukee turnovers.

“We wanted to match their physicality and punch back tonight,” Celtics coach Ime Udoka said. “A big message was show them who we are.”

The Celtics played without Defensive Player of the Year Marcus Smart after he was ruled out before the game with a bruised right thigh he sustained in Game 1. Derrick White took his place in the starting lineup, making his first start in a playoff game since 2019 when he was with San Antonio.

“The ship’s got to keep going. Everybody got to do a little bit more,” Tatum said.

Antetokounmpo said the Celtics are doing a lot to make it tough for him inside.

“Strong bodies, being active, being physical —- that’s pretty much it,” he said. “It’s gotten tougher to find your teammates.”

With Smart watching in street clothes from the bench, the Celtics scored the game’s first seven points on their way to taking an 18-3 lead and forcing a quick timeout by the Bucks.

Boston scored from a variety of different spots on the court during the run – attacking both at the rim and inside the paint. It also included 12 points from the 3-point line, where the Celtics struggled for most of Game 1.

“It’s not Wilt Chamberlain down there (in the paint),” Udoka said. “We can get downhill and attack.”

Antetokounmpo missed his first six shots before finally getting on the scoreboard via a dunk with less than a minute left in the opening period.

It didn’t stop Boston from banking a 32-21 lead heading into the second quarter, boosted by 17 points from Brown –a career playoff-high for a quarter.

The Celtics continued to share and kept Milwaukee’s defense in chase mode, eventually taking a 65-40 edge into the half.

The Bucks cut into what had been a 26-point Celtics lead in the third quarter. Antetokounmpo keyed the charge with 18 points in the period. A 10-0 Milwaukee run, aided by a more than five-minute Celtics scoring drought, trimmed Boston’s lead to 72-56 late in the third quarter.

Milwaukee kept nibbling away and got it down it to 94-82 on a pair of free throws by Antetokounmpo. But Tatum made a 3-pointer and Boston pulled away again.

Celtics: Tatum was whistled for a technical for arguing a call in the fourth quarter. … Finished 13 of 20 from 3 in the first half… Were unsuccessful in challenging blocking foul called on White in the second quarter, his third foul. … Boston scored 15 points off Milwaukee’s turnovers in the opening 24 minutes.

Tatum had his left wrist wrapped in black tape afterward. But he said it was simply an “excessive” tape job by a Celtics trainer.

“I just fell, so to keep the swelling down,” Tatum said.

Udoka said Smart experienced some swelling, pain and restricted movement over the past two days. But the expectation is for him to be ready in time for Game 3.

“With three days off we’re assuming he’ll be OK.”