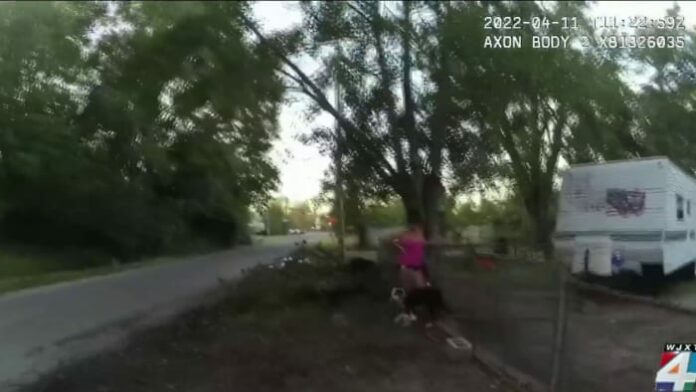 JACKSONVILLE, Fla. – Some may find the footage shown in this story to be graphic in nature. Discretion advised.

Police body camera footage obtained by News4JAX shows the moments leading to a Jacksonville police officer shooting and killing a family’s dog in the Paxon neighborhood.

News4JAX also learned the Jacksonville Sheriff’s Office’s Response to Resistance board found the officer’s actions were within departmental guidelines after it was proven the dog bit the officer on his hand and leg.

It happened at a home on Rockwood Drive near Beaver Street. When we first reported the story, the dog’s owner requested JSO release the bodycam video, and Wednesday, we received it.

In the bodycam video, patrol officer Karl Lampkin is heard asking Kimberly Barus to see her dogs after receiving a complaint that her animals chased a teenage boy at 6:30 a.m. Officer Lampkin wanted to see if the dogs would walk out of the yard if Barus opened the gate.

“Well, he’s out the gate. Hey bud. Hey. Get back!” the officer yells before firing shots.

Lucy, the 1-year-old Great Dane mix, died from multiple gunshots. When we received the video, we checked back in with Barus.

“I particularly don’t want to see the video because I already lived it. I can’t relive it again,” Barus told us. “I wanted the video released for the public to see what happened and to know we were telling the truth, that the officer went way too far with this.”

Defense attorney Randy Reep, a former prosecutor, is not affiliated with this case. He reviewed the video in regular speed and slow-motion and says several things stuck out to him.

“He invited the dog to him. A threat he brought to himself. The dog was previously properly contained. I think animal control folks will tell you that. Secondly. The need to discharge a firearm when he has so many other tools available to him. A baton. A taser. All sorts of non-deadly forces,” Reep said. “Then what’s really disturbing is the dog was actually fleeing at that point when the officer continues to discharge a firearm. And that should be very worrisome. He’s discharging that firearm down range.”

Lucy’s owners have already hired an attorney out of Gainesville who specializes in cases involving animals and say they are filing a lawsuit against JSO.