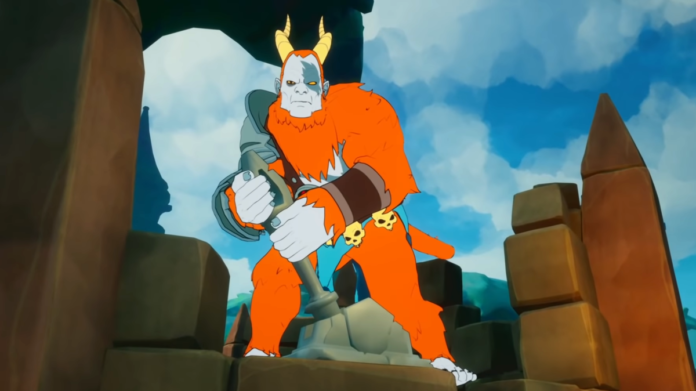 The four-player co-op brawler draws much inspiration from American Saturday morning cartoons, including He-Man and the Masters of the Universe, and the Dungeons and Dragons animated series. MythForce’s colorful art style riffs on their cheesy designs and its swords-and-sorcery world are directly inspired by old TV fantasy stories.

Beamdog describes the game as a roguelike dungeon-crawler, in which you and up to three buddies will fight your way through hordes of monsters, avoid traps, and hunt for treasure. You’ll be using legendary weapons and magical spells in a mix of first-person melee and ranged combat.

Following the usual roguelike formula, you’ll encounter progressively tougher foes and be sent back to the beginning of a procedurally generated castle each time you’re defeated. A persistent progression system will let you upgrade abilities, unlock perks, and achieve special rank upgrades that carry over to new sessions, as you collect treasure and uncover magical artifacts through randomized encounters.

Four playable characters will be open to you: the valiant knight Victoria, Rico the charming Rogue, Maggie the wise Mage, and Hawkins the deadly Hunter. They collectively form the MythForce and must tear their way through dungeons to stop the evil vampire lord Daedalus – that all sounds fittingly cheesy.

Watch the MythForce reveal trailer below. It’s dripping in 80s nostalgia and even has a catchy theme song.

“I’m beyond excited to finally show off our team’s original work,” said Trent Oster, CEO of Beamdog and BioWare co-founder.

“MythForce is pure, unadulterated fun – right out of the Saturday mornings of my childhood,” he added. “With a simple yet satisfying game loop, it’s a big departure from the RPG classics we’re known for, but the Beamdog DNA is evident if you know where to look.

“MythForce is a feel-good game that speaks to the kid in us. In early access, we want to collaborate with players who are excited by our wholesome, ‘80s vision for MythForce, and build up the best game possible. The community will be key to getting us to 1.0.”

MythForce will release into early access on April 20 exclusively on the Epic Games Store for  $29.99 – about £23 / AU$40. Its first self-styled “episode” of content – Bastion of the Beastlord – will be available to play on release, with more released throughout its early access period.

The upcoming roguelike will be Beamdog’s first original work. The studio has spent the last 11 years remastering classic BioWare and Black Isle RPGs. We reckon they’re pretty good, though, and said playing Baldur’s Gate on Nintendo Switch has revolutionized the game.