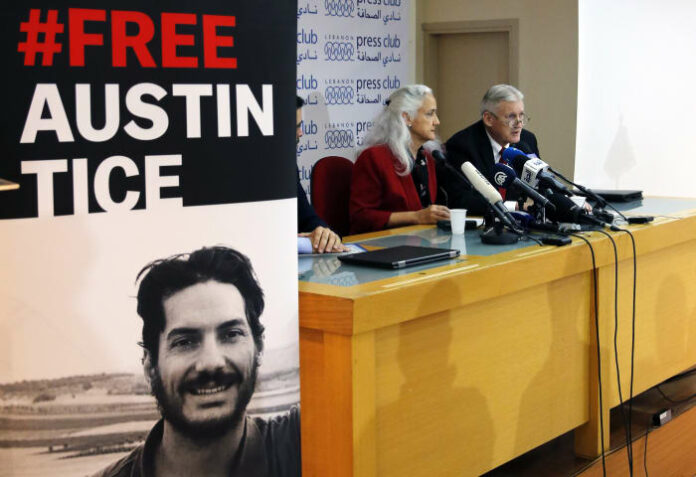 WASHINGTON – President Joe Biden said he was meeting Monday with the parents of American journalist Austin Tice, who was abducted in Syria 10 years ago.

The meeting with Marc and Debra Tice is expected to take place at the White House.

Debra Tice was introduced Saturday night as being in attendance at the White House Correspondents’ Association Dinner, where Biden paid tribute in his remarks to journalists who are missing or detained. Biden also said at the event that he wanted to meet with the Tices to speak about their son.

“After the president made those comments, obviously we went into action to work to set up the meeting,” White House press secretary Jen Psaki said Monday, adding that the White House has “been very closely engaged with the family.”

Tice, who is from Houston and whose work had been published by The Washington Post, McClatchy newspapers and other outlets, disappeared in August 2012 at a checkpoint in a contested area west of Damascus.

A video released weeks later showed him blindfolded and held by armed men and saying, “Oh, Jesus.” He has not been heard from since. Syria has never acknowledged holding him.

In the final months of the Trump administration, two U.S. officials — including the government’s top hostage negotiator, Roger Carstens — made a secret visit to Damascus to seek information on Tice and other Americans who have disappeared in Syria. It was the highest-level talk in years between the U.S. and the government of Syrian President Bashar Assad, though Syrian officials offered no meaningful information on Tice.

Psaki said there have been three meetings between members of the Tice family and administration officials since December, when Debra met with Jake Sullivan, Biden’s national security adviser. The most recent one was last week. Debra Tice has previously been critical of her lack of direct White House access, saying at a National Press Club event last December that she had never met with Biden since he became president and that “he has never said Austin’s name publicly.”

Last week, the U.S. secured the release of Trevor Reed, a U.S. Marine veteran detained in Russia for nearly three years, as part of a prisoner swap.