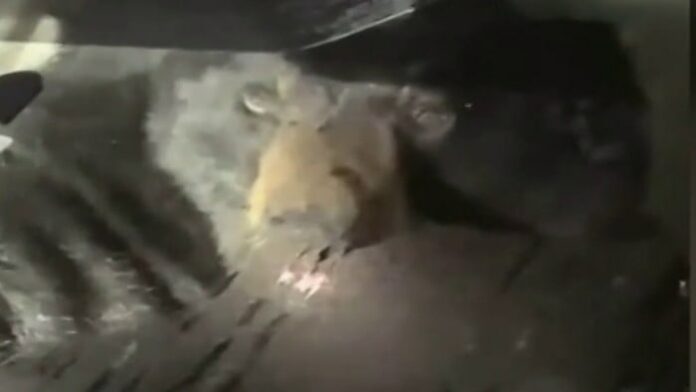 A Connecticut man is safe, but his mother-in-law’s car is destroyed, after a unique run-in with a bear over the weekend.

Cody Gillotti said he noticed something was off when his mother-in-law’s car lights were on and his truck door was wide open.

“I was like, ‘Something’s not right here,’” Gillotti said. “And my daughter’s car seat was on the ground next to it. And I thought that’s real weird.”

So, he went to investigate.

“I went down and saw fog all over the window and sure enough, there was a bear in there,” Gillotti said.

Gillotti saw a black bear hanging out in the front seat of his mother-in-law’s Subaru.

“Wow, I see bears all the time, but never in the car,” Gillotti said.

He called the Department of Energy and Environmental Protection and said he loaded up his 12-gauge shotgun with bean bag shells, tied a rope to the car’s door handle and started yanking it.

Seeing the door move seemed to scare the bear, according to Gillotti. The bear ran away but left behind quite a bit of damage.

“It freaked the bear out big time and the bear just kind of exploded with energy and the door went swinging open,” Gillotti added. “I’m sure the Subaru’s going to be toast. You can’t power-off the vehicle without disconnecting the battery. You take the key out, (but the) lights still turn on. The interior is completely destroyed.”

The back seat of Gillotti’s truck was also damaged.

DEEP says spring is a busy time for black bears as they come out of their winter rest.

The agency said to stay safe never feed bears, take down bird feeders by late March and wait until late fall to put them back up, store garbage in secure containers and keep grills clean and store them inside a garage or shed.

Wildlife experts says if you see a bear, you should not approach the animal, but call authorities to report the sighting.