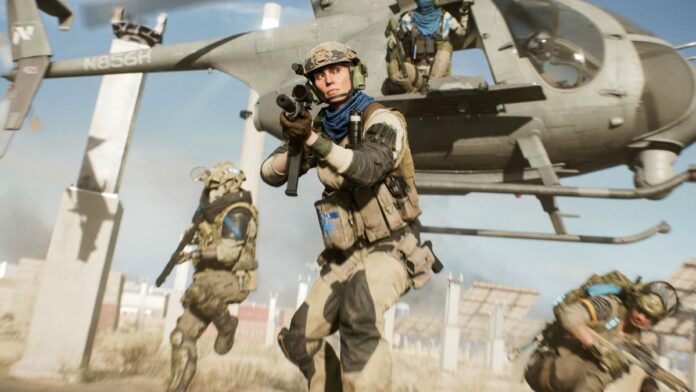 Battlefield 2042 will soon roll out an in-game store that will add additional monetization systems to the multiplayer FPS, and release its long-delayed first season of content.

That’s according to Battlefield 2042 dataminer Temporyal, who discovered several new images and details in the game’s backend following its recent 4.0 Update (thanks, MP1ST). Shared on Twitter, they suggest a handful new features will be coming to the game in the coming months.

One set of images includes what look like category headers for an in-game shop. They suggest content bundles; cosmetics for Specialists, weapons, and vehicles; as well as XP boosts will be introduced as optional purchases. Other images appear to show purchasable bundles of a new premium currency. It looks as if you’ll soon be able to buy the currency in packages of 500, 1,100, 2,400, 5,000, and 13,000 – although what exactly they can be used for, and the real-price cost of each, hasn’t been confirmed.

Elsewhere, the backend includes suggestions of when Battlefield 2042’s delayed Season One will roll out. Update 4.0 included details of eight weeks of pre-season missions. Given the update rolled out in mid-April, that would put the launch of Season One around mid-June.

The 4.0 Update files, however, include references to class-based mechanics, including class selection, progression and leveling, as well as a new in-game description of a Combat Medic that says they “can increase a unit’s survivability through their ability to revive and boost team health”.

#Battlefield2042 Patch 4.0 includes weekly missions for 8 additional preseason weeks. The earliest date for the launch of Season 1:🗓️ June 16, 2022Note: The next patch (scheduled for May) might introduce additional challenges.Oh and here is an unreleased set for Boris: pic.twitter.com/xrW0kkNNeLApril 20, 2022

In combination, those details suggest Dice is preparing to integrate more class-based systems into the game, which more closely align with the features of past Battlefield games. That will be welcome news to some fans who were disappointed with the playable Specialists and preferred the basic four-way player split of past Battlefield titles.

Dice hasn’t confirmed any of these findings. While it previously said it expects to roll out Season 1 sometime this Summer, it hasn’t announced a concrete release date. Nor has it revealed details of an in-game store.

However, Temporyal has a track record of accuracy. Their previous datamines revealed a couple of new features that were later confirmed by Dice, including several weekly challenge cosmetic rewards. Remember, though, that while the broad findings of this latest datamine might prove correct, specific details could change by the time the in-game store rolls out or Season 1 launches.