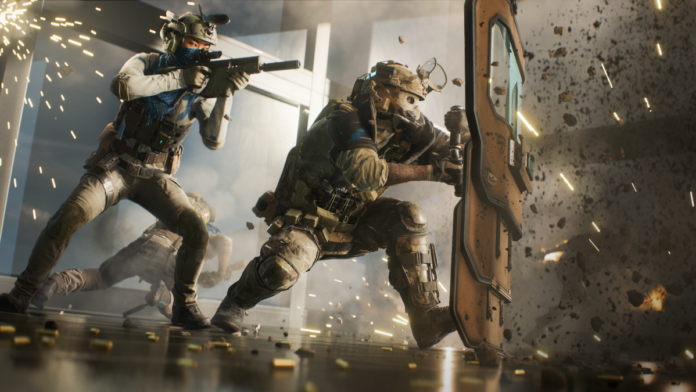 Battlefield 2042 will no longer support 128-player matches of Breakthrough, as developer Dice scales back the mode amid the game’s ailing player count.

As part of Battlefield 2042’s latest 4.1 update, the 128-player Breakthrough playlist has been entirely removed. According to an official blog post, players will now only be able to access the game mode in 64-player matches, and will have to play Conquest if they want to jump into a 128-player fight.

Dice said it has reduced the mode’s player count in a bid to improve its core experience. The developer reckons the intensity and chaos of Breakthrough’s attack-defend gameplay wasn’t supported by large, crowded matches.

“When reviewing Breakthrough, we noted that the 64-player version represented a more tactical experience,” Dice said in the post.

“Reducing our player count here helps to remove some of the chaos from the experience, and in combination with the reductions that we have made to the number of available combat vehicles, it means players are better able to hold frontlines more effectively.

“Players will also find more space to work together and fulfill their individual roles.”

Elsewhere in the blog post, Dice revealed that Battlefield 2042’s much-delayed Season 1 is “currently set for release in early June”. It says it’ll be “back with a full overview and update notes closer to its release”.

Season 1 was originally delayed to give the game’s developers time to fix its persistent bugs and roll out several quality-of-life improvements. It’s already added in-game voice chat and revamped the game’s scoreboard in response to fan feedback.

Not a good look

The removal of the game mode has likely been introduced to accommodate Battlefield 2042’s languishing playerbase. The game has struggled to attract and retain players since it launched late last year, even dropping below the player count of its nine-year-old predecessor Battlefield 4. As fewer players log into the game, it’ll be harder to fill large servers, encouraging Dice to force players into smaller game modes to ensure matches reach full capacity.

But the announcement will achieve no goodwill among disappointed fans. Huge, 128-player matches were pitched as one of Battlefield 2042’s major selling points before the game was released last year, and Dice was keen to prove it had expanded the scope of the multiplayer FPS series. With players no longer able to enjoy that premier feature, the game’s content looks feebler than ever.

This isn’t a new problem, though, as the game’s large maps have been a point of contention since launch. The 128-player game modes were only rolled out on PS5, Xbox Series X|S and PC, and won’t be introduced to the PS4 or Xbox One version of the game. Similarly, Dice previously admitted that many of the game’s maps were too large, and introduced several tweaks to their size and geography.

Worse, this isn’t the first time content has been removed from the game. Back in March, the number of Featured Experiences was reduced from five to three, handing players fewer of the special game modes to play. Any hope of reviving interest in the game hinges on Season 1.