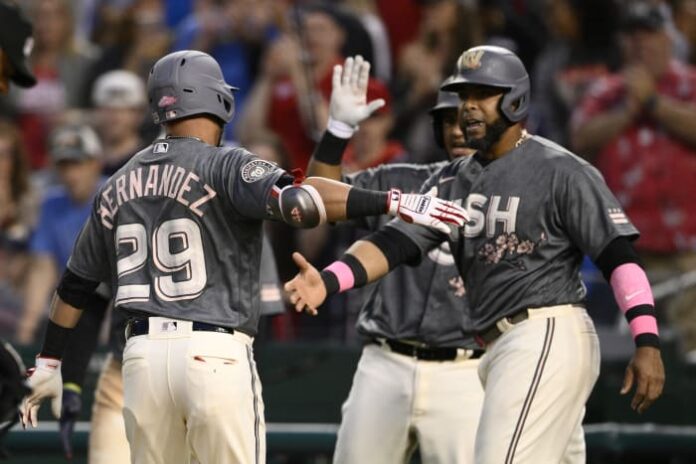 Manager Dusty Baker and the Astros fell one game short of matching the franchise-record 12-game winning string achieved in 1999, 2004 and 2018.

The Houston staff fashioned a 0.91 ERA during this recent run, but Nelson Cruz and the Nationals collected 14 hits and five walks against five pitchers. Starter Cristian Javier (2-1) was tagged for seven runs and eight hits over 3 2/3 innings — the Astros had allowed a total of four runs over their past five games.

Jose Siri had a homer, triple and a single for Houston. Yuli Gurriel also had three hits

Cruz had a three-run double, two singles and a walk for the Nationals — who improved to 5-14 at home. Juan Soto doubled, walked twice and scored three runs.

Josh Rogers (2-2) worked one inning for the win. Washington starter Erick Fedde was lifted after Siri’s leadoff homer in the fifth made it 7-3.

Hernandez hit an RBI single in the first and added a three-run homer into the Nationals bullpen in the third for a 4-0 lead.

Houston got two back in the fourth, but the Nationals loaded the bases in the bottom half with two bunt singles and a one-out walk to Soto. Josh Bell popped out, but Cruz lined a full-count fastball from Javier off the base of the wall in right center to clear the bases.

Franco hit a two-runner homer in the fifth and Washington added four more runs in the sixth.

Astros: 2B Jose Altuve, lifted for a defensive replacement in the ninth inning Friday for precautionary reasons after he slipped on the grass earlier in the game, was given a planned day off. … SS Jeremy Peña missed his second game since leaving a game Thursday at Minnesota with a knee injury. Baker said Peña could play on Sunday.

Astros: RHP Justin Verlander (4-1. 1.55 ERA) pitched eight shutout innings and allowed one hit in his last start, Tuesday against the Twins. He’s 2-0 with a 2.57 ERA in two career starts against the Nationals.

Nationals: LHP Patrick Corbin (0-5, 6.06) faces the Astros for the first time since Game 7 of the 2019 World Series when he pitched three innings of scoreless relief.