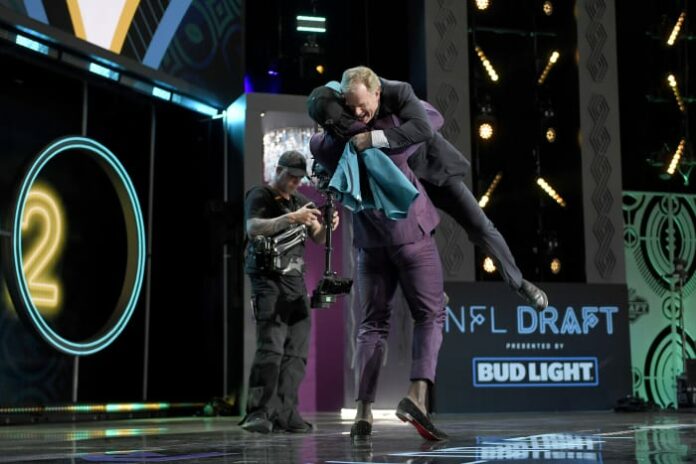 JACKSONVILLE, Fla. – How did the Jaguars do in the draft?

Let’s get my draft grade out here first and then talk about why. I’m giving the Jaguars a B. It was darn-near professional. That’s a step forward after what we’ve seen in the recent past.

This is also a draft with a chance to get a provisional A if Travon Walker becomes an elite pass rusher, something the Jaguars believe he can become. Rather than take each pick one by one, let’s visit the key points the Jaguars accomplished over the three days of the draft.

Coming into the draft, the Jaguars needed to address some specific positional needs, in particular at pass rush, linebacker, interior offensive line, and a number one wide receiver.

They also needed to find a way to maximize the efficiency of their 12 draft selections. The Jaguars didn’t need to bring twelve rookie draft picks to camp, especially when four of those 12 picks were in the sixth round. They needed to use those picks to target key players.

So how did they do?

As mentioned, the pass rush was addressed with the first pick of the draft. While Walker had only six and a half sacks last season, he had 29 quarterback pressures, including 10 in the two games in the playoffs. Will those eventually translate into sacks in the NFL. We’ll see how long Walker takes to start filling the stat sheet.

The Jaguars certainly addressed linebacker. First, they traded picks in the second, fourth and sixth rounds, to move up to No. 27 to select Utah’s Devin Lloyd, an explosive playmaker who can play multiple styles at linebacker. He was second in the country in tackles for loss, returned two of his four interceptions for touchdowns last season, and developed a reputation as a physical run-stopper. When he started falling, the Jaguars were aggressive in moving up to get him. They used some of their extra picks to do so. Perhaps their best move of the draft.

In the third round, they addressed the interior offensive line by selecting Kentucky center/guard Luke Fortner. Whether he comes in and starts right away remains to be seen. The Jaguars have the dependable veteran Tyler Shatley at center and some options at left guard with Ben Bartch and Will Richardson. Where Fortner fits remains to be seen, but this was a solid pick at No. 65.

The other third-round pick, Wyoming linebacker Chad Muma, at No. 70, is tougher to figure. Had the Jaguars not moved up to select Lloyd, this pick would have made a lot of sense. Perhaps they are going to play Walker as a defensive end in the 3-4, instead of as a stand-up outside linebacker ala Josh Allen. If so, then the linebacking corps that will include Foyesade Oluokun, Lloyd and Muma will be comprised of some high-motor, tackling machines. That’s a good thing. We’ll see how it all works out in defensive coordinator Mike Caldwell’s scheme.

The Jaguars didn’t draft a skill position player until the fifth round when they picked Ole Miss running back Snoop Conner. Conner was projected as a fifth or sixth-round pick, so the selection makes sense from a value standpoint. He has some of the same traits as James Robinson, so perhaps he’ll spell the Jaguars starter when Travis Etienne isn’t being used. Conner led Ole Miss in rushing touchdowns with 13 and he also catches the ball well out of the backfield. I think he can make the team and help to add depth.

The Jaguars went to a small school for their sixth-round pick, selecting Ouachita Baptist cornerback Gregory Junior. He could help on special teams as a rookie. The Jaguars’ final pick came in the seventh round, Montaric Brown, a cornerback out of Arkansas. I don’t have very high expectations for most seventh-round picks, so we’ll see how he does. He was projected by some to be a preferred free agent, but the Jaguars nabbed him in the seventh round.

In all, the Jaguars drafted seven players. They used their surplus of picks to move up to get Lloyd and Conner. They also sent a fifth and a seventh-round pick to the Buccaneers in exchange for a 4th round pick next year when they’ll have a better idea of their needs, and a higher pick to use. I like the trade.

What didn’t the Jaguars accomplish? They didn’t add a wide receiver in the draft, though they signed a draftable player, Notre Dame’s Kevin Austin, who could develop into a key player.

Was it a home run of a draft? No. Even if Walker quickly becomes a top 15 pass rusher, it’s not a home run. However, it was generally a well-thought-out and efficient draft. Aside from any questions about whether Walker is worth the first pick of the draft, the Jaguars did what a team in their situation needed to do. Be smart. Don’t try to outsmart the league. Steady the boat. Mission accomplished.