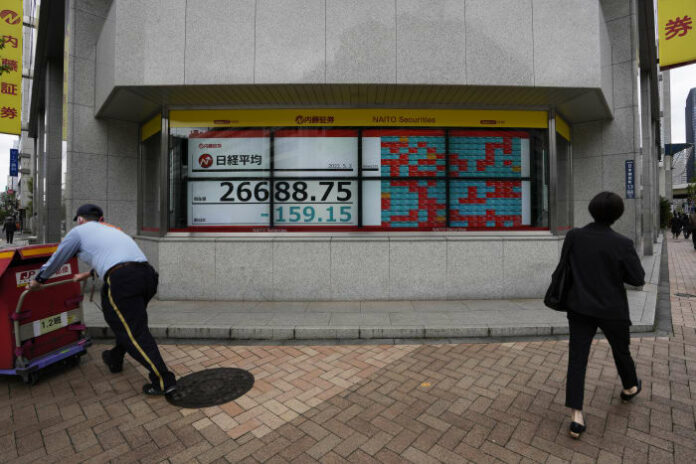 TOKYO – Asian shares slipped Monday lower following a sell-off last week on Wall Street as investors fretted over the impact on regional economies from inflation, the war in Ukraine and COVID-19 lockdowns in China.

Benchmarks declined in Japan, South Korea and Australia. Trading was closed for holidays in China and many other regional markets.

A report showing pandemic lockdowns have hurt factory activity in China, a main regional driver of growth, was a fresh source of concern.

The monthly purchasing managers’ index, released by China’s National Bureau of Statistics, fell to 47.4 in April, down from 49.5 in March on a 100-point scale. Numbers below 50 show activity contracting.

Some enterprises have reduced or stopped production, with disruptions in logistics as well as the supply or raw materials and components.

In Japan, a series of national holidays this week known as Golden Week is allowing people to take a vacation, even in the “workaholic” culture at companies. But the crowds gathering in resorts are adding to concerns coronavirus cases might pick up again, leading to a resumption of restrictions on restaurant opening hours and other business activities.

In Ukraine, an evacuation started of civilians from a besieged steel plant in Mariupol. Ukrainian President Volodymyr Zelenskyy said more than 100 civilians, mainly women and children, were expected to arrive in the Ukrainian-controlled city of Zaporizhzhia on Monday.

Investors have been reviewing financial results from big tech companies, industrial firms and retailers and some disappointing results or outlooks from Apple, Google’s parent company and Amazon helped fuel the selling last week.

Retail giant Amazon posted its first loss since 2015, with the decline knocking more than $200 billion off its market value.

The Nasdaq composite, heavily weighted with technology stocks, has lost 21.2% this year.

Traders are watching for next steps by the U.S. Federal Reserve to battle inflation. The Fed is expected to announce another round of rate hikes this week. That means higher borrowing costs at a time when inflation worries are high on the minds of investors and consumers alike.

Prices for everything from food to gas have been rising as the economy recovers from the pandemic and there has been a big disconnect between higher demand and lagging supplies. Russia’s invasion of Ukraine has only added to inflation worries.

In energy trading, benchmark U.S. crude lost 92 cents to $103.77 a barrel in electronic trading on the New York Mercantile Exchange. It shed 67 cents to $104.69 per barrel on Friday.