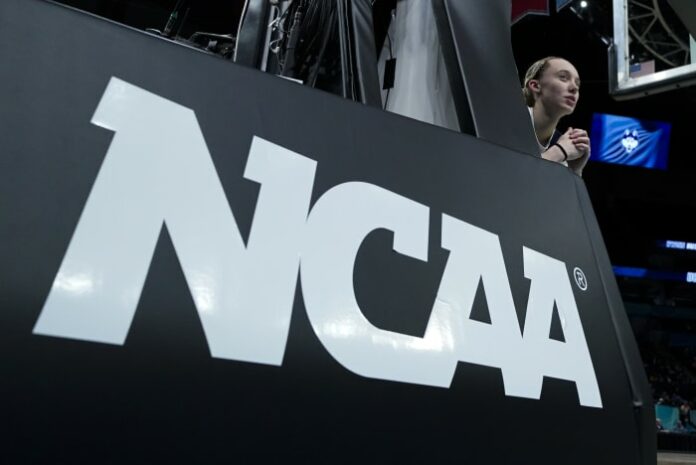 SCOTTSDALE, Ariz. – The latest lobbying efforts on Capitol Hill by college sports leaders come as the NCAA tries to rein in booster organizations funding questionable sponsorship deals for athletes for use of their names, images and likenesses.

The commissioners of the Southeastern and Pac-12 conferences were in Washington on Thursday, meeting with lawmakers to discuss the need for federal legislation to help colleges regulate how athletes can be paid for endorsement deals.

Greg Sankey of the SEC and George Kliavkoff of the Pac-12 were scheduled to meet with lawmakers on both sides of aisle, including Sen. Maria Cantwell (D-Wash.) and Sen. Marsha Blackburn (R-Tenn.). Kliavkoff has previously worked with Cantwell.

The two commissioners were joined by Olympic Committee CEO Sarah Hirshland. Part of the pitch to lawmakers for giving college sports some antitrust protection is that moving to a more professional model for revenue-generating sports such as football and men’s basketball would lead to fewer collegiate opportunities for Olympic sport athletes.

The meeting comes about a week after oft-criticized NCAA President Mark Emmert announced he would be stepping down by the summer of 2023.

“NCAA President Mark Emmert’s resignation is one of many necessary structural changes that will enable the NCAA to support our student-athletes,” Blackburn said in a statement. “During my meeting with SEC Commissioner Greg Sankey and others today, I continued to push for the accountability and fairness measures our student-athletes deserve.”

The lobbying efforts for college sports leaders are not new. The NCAA has worked with lobbyists in Washington for years and, separately, so have the Power Five conferences — the SEC, Pac-12, Big Ten, Big 12 and Atlantic Coast Conference.

Coaches and administrators from several college conferences, including the Big Ten, Pac-12 and Big 12, held spring meetings in Arizona this week and how to bring some uniform standards to NIL compensation was the hottest topic.

“We’ve all spent a lot of time in Washington, D.C. I think it’s great that they’re going to do it, whether anything comes out of it …,” outgoing Big 12 Commissioner Bob Bowlsby said. “We’ve had relationships with the same people that they’re talking to for a while. And so we’ll see what comes of it.”

Bowlsby said college sports leaders have been told there is little if any chance of anything getting done in Congress for college sports until after the midterm elections in November.

“Politics is always about building relationships. And I think you could never do enough of that,” said former congressman and college basketball player Tom McMillen, who now heads the LEAD1 association of college athletic directors. “I told my ADs to get to know their member of Congress. You want to get to know them before you need them, unfortunately.”

The NCAA has generally not regulated NIL activity as booster-fueled collectives have sprung up all over the country. Coaches and administrators have complained that collectives are crossing NCAA lines by using payments disguised as NIL deals as recruiting inducements for both high school prospects and transferring athletes.

In February, the NCAA’s Division I Board of Directors directed to D-I Council to review NIL activities. A working group is trying to provide clarity and details to existing rules barring pay-for-play to manage collectives and make clear that donors cannot be involved in recruiting.

The council meets on May 18 and is likely to receive a report from the working group by then.

But the NCAA’s ability to enforce rules related to compensating athletes was undercut by last year’s Supreme Court decision in an antitrust case, leaving many in college sports skeptical of its ability to crack down on collectives.

“Based on my conversations with lawyers, trying to put this all in some clean little box is going to be difficult,” said Todd Berry, the executive director of the American Football Coaches Association. “The only way this is going to get cleaned up is with some federal legislation.”