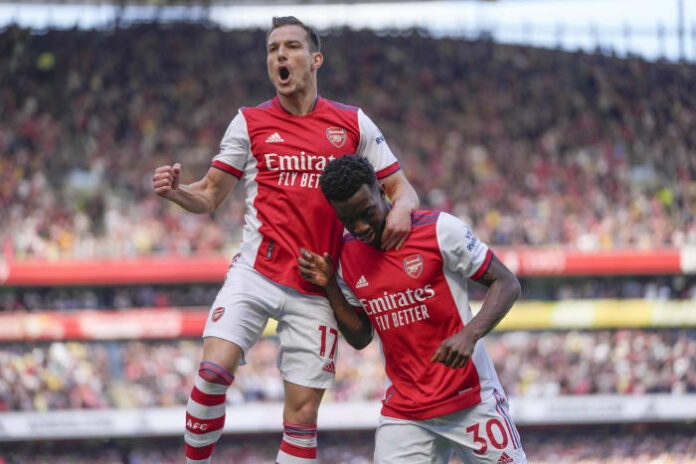 MANCHESTER – The Champions League is preparing to welcome back Arsenal after a five-season absence.

The north London club is close to sealing fourth place and a return to Europe’s elite and lucrative competition after a 2-1 victory over Leeds on Sunday pulled the team four points clear of Tottenham with three games to go.

The first of those is at Tottenham on Thursday and a victory in the north London derby would clinch fourth place.

It was Eddie Nketiah’s double in the opening 10 minutes that ultimately secured the win over Leeds, which had captain Luke Ayling sent off in the 27th minute for a two-footed challenge on Gabriel Martinelli. Diego Llorente’s second-half goal for Leeds couldn’t spark a comeback.

Arsenal qualified for the Champions League for 19 consecutive seasons under Arsene Wenger before two years of failing to do so led to the manager’s departure in 2018.

Losing at Arsenal sent Leeds into the drop zone alongside already-relegated Watford and Norwich, while Everton jumped out of the bottom three with a 2-1 win at Leicester.

Mason Holgate’s header clinched the win for Everton on the half-hour after Vitalii Mykolenko’s volley had been canceled out by Leicester forward Patson Daka. Jordan Pickford’s saves for Everton made sure of the three points in the second half.

Frank Lampard’s Everton has the advantage of having three games remaining while Burnley and Leeds, which are a point below them have one match fewer.

Manchester United’s worst-ever Premier League season — typified by a 4-0 collapse at Brighton on Saturday — has given West Ham hope of dislodging the fallen giant from fifth place.

A 4-0 victory over last-place Norwich kept West Ham in seventh place — enough for Europa Conference League qualification — but David Moyes’ side is only three points from sixth place with two games remaining and one in hand on United in the final Europa League spot.

Said Benrahma’s double, a Michail Antonio strike and Manuel Lanzini’s second-half penalty secured the emphatic win for West Ham, which was denied a place in this season’s Europa League final by Eintracht Frankfurt on Thursday.