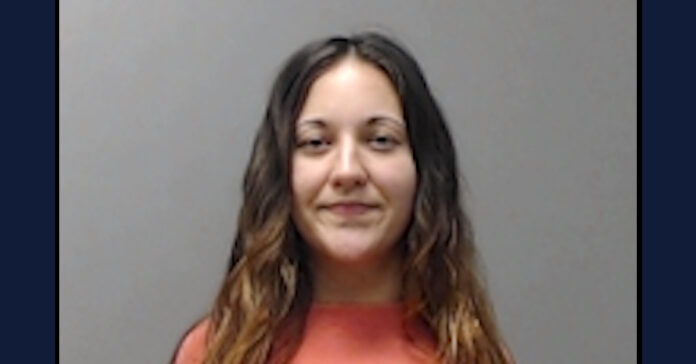 An Arkansas woman who pleaded guilty to murdering her onetime babysitter has been sentenced to spend the next 30 years in prison, according to court documents obtained by Law&Crime.  Ironically, her older sister is already in prison for an unconnected attempted murder that occurred several years prior. Both crimes involved knives.

Amber Lea Runau, now 22, of Gassville, Arkansas, admitted on Monday to the second-degree murder of Sharon Adler, the case file indicates. Gassville is in Baxter County, which borders Missouri in the north-central part of the Natural State.

The presumptive sentencing range for Runau was between 15 and 25 years, according to sentencing papers. A plea agreement contemplated a more serious penalty for second-degree murder while allowing the defendant to avoid the possibility of a life sentence for the original charge of first-degree murder, according to the paperwork.

Law enforcement officers responded to 601 Elm Street in Gassville — a red and brick 1960s-style ranch with a two-car garage that is typical of small-town residential construction in central Arkansas.

The responding officers told the dispatcher to keep Runau on the line and to tell her to meet them in the driveway. Runau did, according to the affidavit, and immediately admitted to the officers that she had stabbed Adler when they arrived.

The officers put Runau in the back of a squad car and went inside the home.

“[W]e entered the residence and discovered Mrs. Adler sitting in her recliner with a large kitchen knife protruding from her upper left chest area,” a captain wrote in the affidavit.  “For Officer safety, we cleared the house then checked Mrs. Adler for signs of life, none were found, the Coroner was requested at that time.”

“After the Coroner picked up Mrs. Adler we transported Ms. Runau to the Gassville Police Department, she was given Miranda Rights, and then described her actions in a very matter of fact manner,” the affidavit continues.

“Ms. Runau described her stabbing of the victim and her further action in watching the eyes as the victim died,” the affidavit states.

No additional details were immediately provided as to the admitted activity afoot. Officers simply noted that Runau was booked into the Baxter County Jail on an initial charge of first-degree murder and that bail was set at $1 million.

However, local news reports from Mountain Home, Arkansas radio station KTLO say the killing occurred when Runau “became upset when she could not ‘fix’ a picture frame and took her anger out on the victim.”

Adler was described by the radio station as a “long time family friend” and babysitter to both the defendant and the defendant’s older sister.

The older sister has faced her own serious brushes with the law. Anna Renae Runau is herself in prison for an attempted murder involving an alleged “juvenile accomplice,” the radio station noted.

The older Runau, now 25, reportedly pleaded “no contest to charges she lured a Salem man to Lake Norfork where she is reported to have stabbed him seven times.” She and her accomplice “planned to steal the man’s truck and drive to Indiana,” KTLO indicated, citing authorities.

According to two Baxter County Sheriff’s Office press releases dated Aug. 31, 2015 and Sept. 2, 2015, the victim in that incident, a 44-year-old man, drove himself to the hospital after being lured into the lake by two teenagers with the promise of a “sexual encounter.” But that’s not what the older Runau and her accomplice had in mind.

“After arriving at the lake and entering into the water, Anna Renae Runau began stabbing the victim in the neck with a knife,” the press release said.  “One suspect said they intended to slit the victim’s throat if it became necessary.”

One of the victim’s stab wounds was five inches deep, the authorities said.

Anna Runau wasn’t hard to catch: the second press release said she showed up at the hospital where the victim was being treated. She was taken into custody in the parking lot after she approached a lieutenant and confessed.

A law enforcement diver located the folding knife in question in the lake where the defendant said she threw it. The weapon was about 50 feet from shore under about nine feet of water.

The older sister’s accomplice in the 2015 tryst-turned-transgression was eventually identified as Kendall Skye Desetta when she was charged as an adult, the sheriff’s office later added.

KTLO reported in September 2021 that Desetta received a 10-year suspended sentence coupled with required check-ins with the local constabulary. When she failed to remain in contact with her probation officer, she was carted off to serve two years behind bars, the radio station indicated. However, she does not currently appear in Baxter County jail or Arkansas state prison records.

The court processes that transpired in the younger Runau sister’s case involving the stabbing death of the babysitter included multiple discussions, documents, and hearings about the defendant’s mental competency, according to the court docket in that matter.  A notice of intent to rely on a defense of mental disease or defect was filed on Sept. 17, 2020.

The contemplated exam attempted to determine Runau’s fitness to proceed toward trial (e.g., whether she was legally competent to face the charges) and whether or not she was mentally able to be held criminally responsible (e.g., to bolster the mental disease or defect defense), according to a September 22, 2020 order signed by Judge John Putman. A forensic examination was scheduled for early 2021, other documents show.

Jury trials in March 2021, May 2021, January 2022, March 2022, and May 2022 for Amber Runau were scheduled and cancelled — apparently while the defendant was under the care of the Arkansas Department of Human Services.

Another trial for late 2022 was also cancelled — but this time the defendant entered a plea. A Monday, Oct. 17, 2022 notation on the docket reads as follows:

PLEA: The Defendant appeared before Judge Putman this date and freely and voluntarily entered a negotiated plea with the State of Arkansas. The defendant is adjudged guilty and sentenced. The State shall prepare the Judgment. IT IS SO ORDERED BY CIRCUIT JUDGE JOHN PUTMAN.

Besides spending the next 30 years in prison, a sentencing sheet says the defendant must also pay a $1,000 fine and $690 in costs. She received credit for 495 days served prior to sentence.  The sentence will be served in an Arkansas Department of Correction facility.

The judge’s order did not precisely explain why the final sentence was beyond the presumptive sentencing range contemplated in the document. Neither a “yes” nor a “no” box was checked on a court form to indicate that the sentence was officially a “departure,” and no items from a laundry list of potential aggravating or mitigating factors were indicated on the requisite portion of the form where such entries might typically be noted.

Local jail records in Baxter County say Amber Runau was booked on Nov. 30, 2021, at 2:57 p.m. — likely the date she returned from a mental health evaluation — and was released to state custody at 6:35 a.m. on Wed., Oct. 19, 2022. She appears on a “waiting list” of inmates being processed with the Arkansas Department of Corrections as of Wednesday morning as inmate number 719205.

Comments on what appears to be Adler’s obituary say she was active in a local church before she became ill and needed in-home care. The obituary says she worked for North Arkansas Glass.