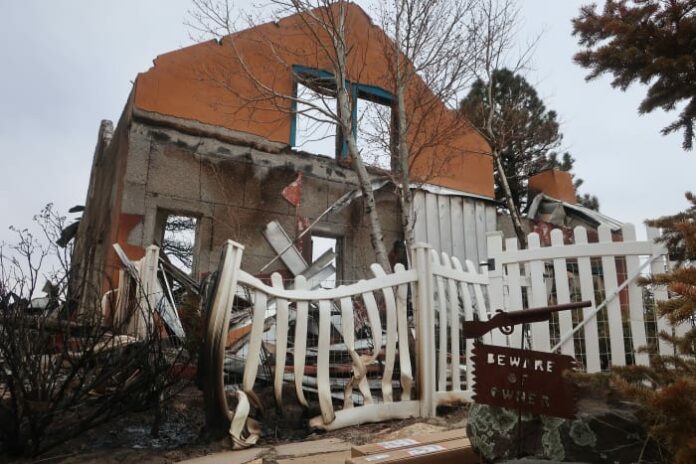 FLAGSTAFF, Ariz. – In a small enclave in northern Arizona where homes are nestled in a Ponderosa pine forest and tourists delight in camping, hiking and cruising on ATVs, high winds are nothing new.

But when those winds recently ramped up and sent what was a small wildfire racing toward their homes, residents in the close-knit Girls Ranch neighborhood near Flagstaff faced a dilemma: quickly grab what they could and flee, or stay behind and try to ward off the towering, erratic flames.

Most of the property owners left. One couple stood their ground. Another raced to save animals on neighbors’ properties.

The blaze that started Easter Sunday swept across vacant lots, scorched tree stumps and cast an orange glow on the parched landscape. Flames licked the corner of one woman’s porch and destroyed two other homes, leaving a mosaic of charred land as the 30-square-mile (77 square-kilometer) fire finally neared full containment this weekend.

Elsewhere, firefighters in northern New Mexico on Sunday continued to battle the largest active wildfire in the U.S. as strong winds pushed it closer to the small city of Las Vegas.

Officials said the blaze had damaged or destroyed 172 homes and at least 116 structures since it started April 6 and merged with another wildfire a week ago. Officials said the fire had grown to 162 square miles (419 square kilometers), but was still 30% contained.

The blazes are among many this spring that forced panicked residents to make life-or-death, fight-or-flee snap decisions as wildfire season heats up in the U.S. West. Years of hotter and drier weather have the exacerbated blazes, leading them to frequently burn larger areas and for longer periods compared with previous decades.

Some who live in Girls Ranch had just minutes to react.

Polly Velie rushed out of a physical therapy appointment when she learned her home was in the evacuation zone. She sped through embers and thick smoke to find her husband hosing down the driveway. Her voice shrieked as she yelled above the smoke alarms going off throughout the house.

“Bill, we gotta go!” she hollered.

But Bill Velie — who cut fire lines with a dozer in multiple states for years — was intent on staying. It’s the same decision the couple made in 2010 when another wildfire in the area forced evacuations. Polly Velie said she’s never been more scared, but the choice wasn’t difficult: “This is our house, and he’s my husband.”

The couple watched neighbors load up horses and donkeys and haul them off. They saw torched tumbleweeds fly across a major highway, flames tear through an old stone house and a propane tank burst.

“Boy, that made her jump,” Bill Velie said. “Just like a bomb went off.”

Firefighters encouraged them at least a handful of times to leave, and they agreed to if the winds shifted. More than anything, Bill Velie reassured them he had things under control.

He had thinned parts of the national forest on the other side of his property line, and he regularly mows the grass. They kept sprinklers running outside, and Bill Velie bladed the edge of the forest a few times where it looked like the fire was crawling toward neighbors’ homes. At night, the flames twinkled on the hill behind them like red stars in the sky.

Ali Taranto and her husband, Tim, own a house in the neighborhood. They saw news about the fire on a neighborhood Facebook page and drove from Winslow, where she works as a nurse about an hour away, to check on the 5-acre (2-hectare) property.

Ali Taranto drove past the neighborhood’s namesake Girls Ranch property, once a home for troubled girls, and saw parts of the white fence melted to the ground.

She checked on her neighbor, Marianne Leftwich, who said she was fine. But Taranto didn’t hear from her for about an hour. Then, Leftwich’s daughter called to say her mother was stuck in her house.

Taranto alerted emergency responders, she said, but dispatch told her she’d probably get to Leftwich before they could. Taranto found the woman semi-conscious and gasping for air, in need of help to evacuate, Taranto said.

“As a community in an emergency like this, all the systems were totally overwhelmed,” Taranto said. “Thank God I got there and got her out in time.”

Taranto took Leftwich’s dogs to a kennel, then returned to rescue a goat and a cow she saw roaming around nearby.

Other than some burned grass and brush, Taranto’s property was unscathed.

Harriet Young’s house overlooks the neighborhood. She hired an arborist last year to remove dead trees and cut low-lying branches as a fire-prevention measure. She had pinkish gravel laid on the long driveway and around the front of her house.

Young believes it saved the home she and her late husband built in the 1990s. The wildfire burned all around it, sparing the house and the invasive olive trees that her daughter wished hadn’t survived.

“This was a miracle, that’s all I got to say,” said Young’s daughter, Stacey Aldstadt, who stayed with her mom for a few days after the fire swept through.

When they were allowed back home a week ago on Sunday, they had no heat or hot water. Young spent four days battling with propane companies to get it turned back on. Finally, she persuaded a former fire chief to come by and fix it.

Everyone here knows Young, the staunch Democrat who regularly hosts Christmas parties. She made call after call as the fire progressed and planned to stay home, based on what she’d heard.

But neighbor Jeanne Welnick saw the plume of smoke that seemed so distant grow and move toward their neighborhood, and urged Young to leave.

The Welnicks initially bought the house behind Young’s as a vacation property. The previous owners built it with wildfire in mind.

The 14-inch-thick (36-centimeter) exterior walls are concrete sandwiched by Styrofoam cells topped by a metal roof. Those walls are still standing.

The rest of the Victorian ranch-style home painted orange with green trim isn’t.

Flames tore through, twisting strips of metal that creaked as the wind blew through. Shards of glass and nails shot out onto the driveway where the Welnicks wrote their names and the year they bought the house, 2004.

A cherub statue the Welnicks placed outside as a memorial to a child they lost to miscarriage looked down at the rubble. Two packages that were delivered to the walkway after the home burned held material for trellis arches the Welnicks planned to assemble over their vegetable garden. Unburned pavers and bags of sand sat off to the side of the garage, ready to be laid down.

At midday, a bell that was near the front door to welcome them home rang out, hidden among piles of debris.

Jeanne Welnick scanned the property, wondering which trees would survive. She grieved the loss of her paintings and a squash blossom necklace that was passed down through her husband’s family. She kept it in a glass case.

“I’d like to look for that, but it’s probably not even there,” said Welnick, an artist.

Their dogs, guitars and some sculptures made it out with them, through what Welnick described as a roaring train, dark, scary, like Armageddon.

In the aftermath, some neighbors struggled with the right words to say to those who lost their homes. Some offered food, clothes, a place to stay and set up fundraising accounts.